The 2012 Republican Primary Candidates in Perspective 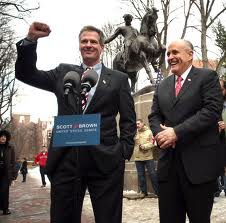 Scott Brown and Rudy Giuliani, two Republicans who chose not to run for President in 2012.

Paul Begala, the Democratic political commentator and campaign manager, summed up the consensus of the candidates in the 2012 Republican primary, suggesting that Obama is already one of the winners of the 2012 campaign.

Barack Obama: If his predecessor cursed Obama by handing him a depression and two wars, the Good Lord has blessed him with the weakest field of opponents in memory. I stand by my early assessment: when I look at the economy, I think Obama can’t win, but when I look at the Republicans, I think he can’t lose.

I’ll admit that the 2012 Republican presidential field was pretty weak. Michelle Bachmann and Herman Cain, both of whom were top tier candidates for a while, weren’t ready to be President. Newt Gingrich and Rick Santorum had the resume, but both failed spectacularly in their highest offices (Newt Gingrich was forced out as Speaker of the House, while Rick Santorum failed to get forty percent of the vote running for re-election.) Ron Paul and Gary Johnson were closer to the ideology of a third party. John Huntsman was a moderate Mormon former Governor with a rich dad, in a race in which Romney already filled that slot.

It’s not a surprise that Romney is currently at 89% on intrade. I’ll note that Jonathan Bernstein of A Plain Blog About Politics suggests that there was another primary amongst party actors, which included candidates who chose not to run after realizing they were unlikely to win the primary. So, there is an alternate view.

But the talk about Republicans being so mediocre this year got me thinking about the all-time worst presidential primary fields. These usually came at a time when a party had been out of power for a while, resulting in a complete lack of qualified candidates. The Republican Presidential field is much weaker because of the party’s losses in 2006 and 2008, which ended the careers of a few potential Presidential aspirants and prevented a few others from being elected to statewide office in the first place. But there have been times it’s been a lot worse.

Mike Huckabee and Marco Rubio, two more Republicans who chose not to run for President in 2012.

In 1904, Theodore Roosevelt was so intimidating that even William Jennings Bryan decided not to run. Bryan was a former two-term Congressman known for his oratory, who lost his sole bid for statewide office (a Senate election in 1894), but still managed the Democratic party’s nominee in 1896, 1900 and 1908, which suggests that his opposition in those years was rather unimpressive. In the 1904 cycle, the Democratic primary was between first-term Representative William Randolph Hearst, the famed newspaper publisher and Alton B. Parker, the Chief Justice of the New York Supreme Court. Curiously enough, a 2012 Republican equivalent would probably have been between two African-Americans: Allen West of Florida, the tea party’s favorite freshman representative, and Wallace B. Jefferson, Chief Justice of the Texas Supreme Court.

Sometimes the problem for political parties is the refusal of qualified candidates to run. At least Gingrich, Perry, Pawlenty and Romney ran in 2012. In the 1992 Democratic primary, the NINE highest-polling potential candidates all chose not to run. That left the primary to two Senators from small states, a former one-term Senator from Massachusetts, a former California Governor whose last election was a losing senate bid ten years earlier, and a small state Governor who was open about the fact that he had cheated on his wife in the past. Republicans stopped laughing only when it was clear that Bill Clinton was going to win the General Election, too.