Ranking the new 52: The bottom quarter

I’ve recently decided to read the first five issues of each of DC’s New 52 titles, and rank the books from Best to Worst. Yesterday, I started with the bottom five.

And now it’s time for the rest of the worst titles.

Eric Wallace does clever things with the protagonist’s intelligence. I like the idea that Michael Holt’s son from the future prevented him from committing suicide. The villains aren’t that interesting, but there was one scene that was pretty cool: When a virus caused a lot of people to go beserk, and we saw an evil version of Michael Holt. The messages on politics and religion are a little tick sometimes, though it is amusing to have a book that basically portrays atheism as a superpower. The art’s competent, but unremarkable. The title has some promise, but I don’t regret that it’s one of the first books DC will be cancelling.

When most modern comics feel padded, it’s because scenes just take too long. This title is padded in a more old-fashioned way, with scenes just feeling repetitive.

Ed Benes draws alien violence pretty well, which is just what you need in a book which shows what you get when the Green Lantern Corps is blended with the Hulk. The team dynamics are interesting, though it takes a while to establish everything. Milligan takes advantage of the mostly alien cast. There are some really cool scenes, especially the debut of the lead’s pet, and one member’s visit to her mother’s grave. But so far, the challenges just aren’t that impressive. 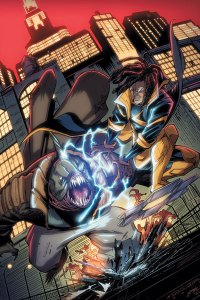 The most promising part of the series is a holdover from before Flashpoint involving Virgil’s family. He has an entertaining personality, and I like the fish out of water aspect with his new hometown. Scott McDaniel’s art, especially the coloring, seems old-fashioned, reminding me of the generic style of the guys in the 90s who weren’t trying to ape Image. The bad guys are also really generic, and the supporting cast is unfocused. This is another of the first titles to be cancelled.

It’s one of the least accessible titles to new readers, a continuation of Paul Levitz’s run on a book with more than a dozen members. The opening arc does provide an interesting enemy: a twisted Daxamite who essentially has the powers of Superman. But it’s pedestrian, as far as evil Superman stories go. The “day in the life” fifth issue is better, and I liked how a shapeshifter hid in an alien spacecraft.

There’s an energy to Rob Liefeld’s art, despite its numerous and well-documented technical flaws. Deadman’s supporting role as Dove’s boyfriend is great, although the relationship is funnier and weirder in Justice League Dark. The differences between Hawk and Dove aren’t really explored in a clever way, which is a shame considering the potential for conflict, and the fact that it’s the basis of the title.

I get that it’s a big deal within the series that there are now other avatars of war, with Hawk’s powers. The problem is that this type of story happens in almost every comic book series, as heroes discover that they have enemies with similar power sets. So something that’s supposed to be unprecedented just comes across as generic.

This is the point in the countdown at which the books I’m reading have crossed the threshold from “Possibly bad” to “Not bad.” It’s astounding for a relaunch this big, when you consider all the possible complications that could screw up a comic book, and how many okay comic books this means DC is publishing. That’s hard for a Marvel Zombie like me to admit. 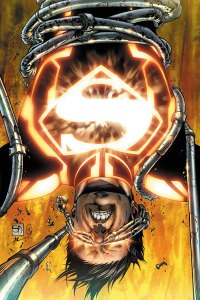 This is one of several new DCU titles from the point of view of an alien figure, studying humanity. It’s solid enough, although JMS did it much better in Supreme Power. And it’s exceeded in both Supergirl and Voodoo.

The book feels really incomplete if you’re not reading Teen Titans, though it does seem like a title that was always going to be a supplement for fans of that one. When read together, you get two different perspectives of the same mega-arc, although I’m not yet convinced that the mysterious Project N.O.W.H.E.R.E. justifies that level of commitment from readers and writers.

There’s a slapdash approach to the book, especially in the odd structure. The first issue ends with a cliffhanger suggesting that Superboy will be sent after Teen Titans, but this won’t happen chronologically until after Superboy #5. The third issue begins with the introduction of two villainous lovebirds, who aren’t relevant until the next issue, which is sorta confusing since there’s a plot point in between involving a different set of young lovers. R.B. Silva’s art is pretty good, and there’s a great twist involving a surprise guest starr. That plot seems to be resolved in an anticlimactic manner in the fourth issue, but takes a promising turn in the fifth.

Many beats of the weakest Batman title are really generic. Hell, there are things happening here that also happening in other new 52 Batman books (an escape at Arkham Asylum, an impostor Joker, the narration in the first sequence revealed as part of a speech Bruce Wayne gives to fellow rich people). And it was better told there, which makes this the most disposable of the Bat-books. It’s a poor man’s Hush with an A-list Image style artist drawing a mystery in which Batman encounters guest-starrs and A-list enemies.

I do like the idea of someone beefing up all the Bat-foes. The take on the Ventriloquist is the most effective. I also like how this causes a messes for other DC superheroes. It’s clever to have Wonder Woman unable to help Batman because she’s dealing with other Arkham inmates. There is actually an emotional payoff, especially Bruce Wayne’s relationship with James Gordon, which is rarely explored. But it’s also a story about fear and neurotoxins in which it’s supposed to be a twist worthy of a cliffhanger when the bad guy turns out to be the Scarecrow.

I’ve read a few comics with the Jamie Hernandez Blue Beetle, and for some reason, I’m more bothered by his adventures being erased than I am of the same happening to the likes of Superboy and Supergirl.

Jamie is a likable lead, and there’s a good dynamic, as he struggles to control a possibly malevolent alien force. There’s nice potential for future arcs here. The spanglish is a bit much, and the supervillains are numerous and so far unimpressive. Considering all of the challenges Jamie is facing on Earth, I also think it’s a mistake of Bedard to spend so much time on the Blue Beetle organization in Space.

1 Response to Ranking the new 52: The bottom quarter