A History of Losing Vice-Presidential Contenders

Doug Mataconis of Outside the Beltway suggests that Marco Rubio, the odds on favorite for the spot, probably doesn’t want to be Romney’s running mate. He brings up an interesting fact, reasoning that it’s not a winning proposition.

Indeed, considering that a losing Vice-Presidential candidate has only become President once in American history, one wonders why Rubio would take the offer at this point in his career.

Moral of the story: Barack Obama is the odds-on favorite to win reelection right now, which certainly raises questions about how smart it’d be to accept the #2 spot on the GOP’s ticket.

That being said, it still seems a plum gig when you consider that 2016 could have an unbelievably strong GOP field, and a VP nomination could give someone a clear leg up. Plus, who really ever turns down VP?

Last year, Lawrence O’Donnell mentioned this to dismiss a potential Palin candidacy. The one losing Vice-Presidential candidate who became a President was FDR, but he also served as Governor of New York in the interim. Bob Dole was a losing ticket-mate in 1976, but received the Republican party’s nomination twenty years later, after becoming Senate Majority Leader.

I think the pitfalls of being on a losing ticket are exaggerated, as there are other reasons the likes of Lloyd Bentsen, Jack Kemp and Joe Lieberman did not go on to become President. Some politicians are simply unable to deal with the media scrutiny, and just weren’t vetted as thoroughly as the guys at the top of the ticket. For example, Gary Hart’s 1988 presidential bid failed because reporters found out about his mistress. In the current cycle, Rick Perry looked good on paper, until he opened his mouth. The search committees just aren’t that good at weeding out the weakest candidates, due to the limited amount of time available and relatively limited resources. 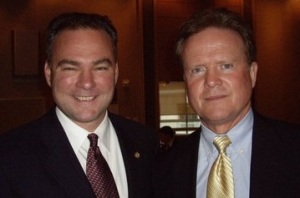 Several of the vice-presidential candidates are chosen for campaigns that are unlikely to win. Often that comes during a bad period for a political party, which means that there’s a lack of qualified contenders. As a result, the pool isn’t as strong as it could be. For example in the 2006 cycle, Sarah Palin was one of only five Republicans newly elected to top statewide office (Governor or Senator.) There were nine new Democratic Governors elected in the 2005 or 2006 cycles, along with nine new Senators, many of whom defeated incumbent Republicans who could otherwise have been on a national ticket.

Very few Governors are chosen to be running mates, while four of the last six Presidents have been Governors. In that period, there was also one Governor (Dukakis in ’88) who lost the General Election. So it could be that there’s something to the process that results in the selection of the weakest candidates. If so, this doesn’t affect a candidate’s chances if he’s chosen, as the odds were always low.

The three Senators elected to the White House have one thing in common: they weren’t in office for a very long time. Warren G Harding had been Senator for six years, JFK was two years into his second term and Barack Obama hadn’t even finished his first term. So long-time Washington figures could be at a disadvantage in the race for the highest office, which is problematic for any Senator nominated. Many of the losing Vice-Presidential candidates had been in office for a while when they were first chosen. And their first opportunity to run for President will come at least four years later. It’s also possible that long-serving Senators are more likely to be nominated in bad years for their respective political parties.

Sometimes running mates are chosen for reasons that don’t appeal to the primary voters. Joe Lieberman was one of the few Democrats to vote to impeach Bill Clinton, so putting him on the ticket allowed Gore to distance himself from Monica Lewinsky’s boyfriend when appealing to swing voters. But the primary voters are less likely to be swing voters, so Lieberman was only able to get 9% of the vote in the 2004 New Hampshire primary.

Democratic voters were probably happy with voting for the first woman to be on a major national ticket, but Ferraro demonstrates another pitfall to being chosen for the underdog’s campaign. Likely losers are more likely to make risky decisions, in the hopes of generating excitement. Mondale’s insistence on a precedence-shattering ticketmate meant that his options were restricted. His shortlist consisted of Ferraro, a first year Governor and three mayors, two of whom would be lose to the Republican nominees while running for Governor of California.

It’s worth remembering that there will always be demand for a political party’s presidential nomination. This means that a losing Veep candidate will be one of several politicians competing for it.  The 2012 Republican field is widely regarded as one of the weakest in memory, but it included the 2008 runner-up, the 2008 veepstakes runner-up, a 2008 also-ran who did best with fundraising and the youth vote, the best fundraiser in the US House (this candidate also happened to be a woman), a conservative Governor so respected he was offered an Ambassador’s post in the Obama administration, a former Speaker of the House responsible for the party’s biggest electoral accomplishment of the last few generations, a former swing-state Senator and a guy in his 11th year as Governor of the largest state with a Republican chief executive. Sarah Palin’s reluctance to compete against this field is understandable. In most cases, any candidate who enters a crowded field is more likely than not to lose even the first part of the race.

The biggest disadvantage to being on the national ticket is that in the crowded field, you start out with a target. Hillary Clinton initially saw John Edwards as more of a threat than Barack Obama. Jimmy Carter might not have been able to surprise as many people had he been McGovern’s running mate in 1972, and he did want that post. On the other hand, we remember the insurgent campaigns that won (or at least got the nomination) more than the underdogs who became top-tier also-rans, and we remember those guys more than those who always polled in the single digits, and never did better.

It’s worth looking at the losing nominees to see if there’s anyone who could have been President, if they had only managed to avoid the taint of a national loss. Walter Mondale skews the statistics. Because Jimmy Carter was a one-termer, there technically was no losing vice-presidential nominee in 1980. When Mondale ran in 1984, he was able to get the nomination on the strength of his four years as Veep. Ferraro didn’t run, largely because of scandals and an inability to get elected to statewide office. Lloyd Bentsen was in his early seventies in 1992, and had assumed that George HW Bush was too strong a candidate.

Dan Quayle did serve as Vice-President for four years, but had developed a reputation as a national joke. Jack Kemp had been out of office for eight years by the 2000 election, and apparently got his ass kicked in his debate with Gore. First elected in 1970, he may have been out of touch with the Republican electorate of 2000. Lieberman wasn’t chosen because the primary voters loved him, and Edwards finished third to two individuals who didn’t make John Edwards short-list: a Senator elected in that cycle, as well as another Northeastern blue state Senator.

I don’t think Sarah Palin would have ever been considered a presidential contender if she hadn’t been McCain’s running mate. Tim Pawlenty likely would not have had the fundraising problems that doomed his presidential big if McCain had gone with him instead, so his campaign probably would have gone better. I don’t think it would have hurt George W Bush to be Dole’s running mate in 1996. Being on the Dole ticket would probably would have helped McCain four years later.

There are some differences in the candidates Democrats and Republicans nominate for the White House. Republicans prefer figures who are known on a national level. With a party that rewards the next in line, it would probably help Paul Ryan, Rob Portman, Susanna Martinez and company to be the running mate, and have a claim to that mantle and the various institutional benefits. It’s possible they’ll still lose the nomination, but that was probably going to happen anyway.

While being a losing Vice-Presidential contender may not help your career, it’s great to be on a winning ticket. You’re one of the most prominent politicians in the country and the clear next in line for your political party. The major exceptions would be those who are too old (Joe Biden), or who have significant health problems (Dick Cheney.) So while the disadvantages of losing may be exaggerated, it’s not premature to start rehearsing nomination speeches if you become the veep.