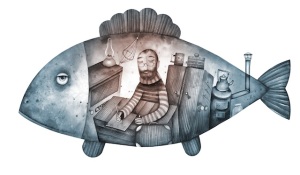 In Three Uses of the Knife, David Mamet identifies the second act of a film or play with Joseph Campbell’s “Belly of the Beast.” (38) In Jonah’s case, it was literal. As Mamet explains, if Act One is the dream, Act Two is the complications (39). He described the second act as the most difficult to write. The characters and conflict have been introduced, and the dramatist struggles to maintain the audience’s attention, with the ending still out of sight.

The first half of the act was typically when the characters had fun, so that part isn’t as burdensome. And if the second act was as long as the first and third, things would be much easier for the writers. But the second act is often more than half the film, and the latter half of it (which some would consider the third act for a four-act piece) is the part that’s problematic. The task has become more difficult, and the characters aren’t having as much fun. The writer has to maintain both interest and momentum, even if the climaxes are distant. At the midpoint of a two-hour film, the conclusion would be an hour away, and there would also be about 35 minutes until the Act Two climax.

This is the point at which the protagonist has realized how difficult the task is. So there has to be a struggle, but the movie’s over if the character suddenly discovers the solution. So the writer has to be able to delay both the audience’s and the character’s gratification. It also helps to convince the audience that the hero’s cause has no solution, but that has to be done in a way that keeps them intrigued about what’s coming next. The writer has some time to kill while Jonah is stuck in the whale.

The writer has several tools at his disposal, and the success of the film could depend on how well he handles the part of the film most likely to be boring. There could be a focus on subplots, although there is the risk that that these may derail the narrative. However a well-done subplot could inform the main arc, or tie into the main story.

The other tool is to explore the character’s short-term needs. In a TED talk, Writer/ Director Andrew Stanton made a crucial distinction between short tension and global tension. Short tension is about the immediate goals and dangers faced by the characters, while global tension is the overall mission. So, global tension would be whether James Bond could defeat the criminal mastermind. Short tension is whether he can sneak past a security guard. There could be many reversals in the short tension, but it’s a reversal in the global tension which would result in a change to the overall arc, and signal that an act has been concluded. So to pass the time until Jonah exits the whale, the writer could have him experience a few hallucinations. Although there’s the gamble that the short tension will seem inconsequential, if it’s obviously just a way to delay the second act climax.

As a side note, there’s a cautionary tale about the risks of focusing too much on plot, which involves Andrew Stanton. An article in Wired about John Carter of Mars mentioned how he has worked out a potential sequel in three-act structure form. Unfortunately for him, John Carter of Mars has earned the reputation as the biggest flop in recent movie history, with Disney making a write-off of $200,000,000. Though he presumably plotted out his more acclaimed and more successful films Wall-E and Finding Nemo, so the piece also provides confirmation that some talented people rely on three-act structure.