And the Emmy Goes Yet Again… 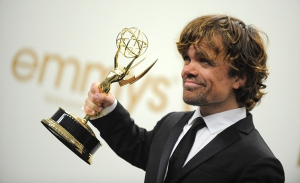 The Emmy for Best Supporting Actor in a Drama is probably going to go to Breaking Bad‘s Aaron Paul or to Peter Dinklage of Game of Thrones. This shows the major problem with the award. Actors can be nominated every year for the same performance, so they can win for essentially doing the same thing just as well as they had the year before. With Tyrion Lanister, the combination of actor and role has resulted in possibly the best character on television. So Dinklage will likely win again. Unless Aaron Paul wins again.

The problem is more significant in the lead categories. Bryan Cranston won the Emmy for Outstanding Actor in a Drama Series three years in a row. His wins were preceded by James Spader, who won three out of four times (losing to Sutherland after a particularly good season of 24) for playing Alan Shore on The Practice, and Boston Legal. Spader was preceded by James Gandolfini, who won three times in four consecutive years (he didn’t win for the 2001-2002 season, when The Sopranos was on a hiatus). Gandolfini was preceded by Dennis Franz who won a record four Emmys out of six consecutive years for playing Sergeant Andy Sipowicz on NYPD Blue.

It would be be better if a performance were “retired” from the nominations after the actor wins an Emmy. The award would be slightly less exclusive, but more people would be honored, and it’s still limited to one per year per category. It forces the nominating committee to seek out more candidates, raising the profiles of stars and programs. Hopefully, it would result in more nominations for critical darlings (it’s a shame that none of the actors on The Wire were ever nominated) and genre shows like Doctor Who. It avoids the awkwardness when a much-honored actor loses, or is no longer even nominated. And the award remains prestigious as something that can be useful for marketing purposes years later.

I would be accommodating under the standards for making an actor or performance is sanctioned for other awards after the first win. So the performance could still be eligible again if the actor switches categories (IE- from lead to supporting, or vice versa), the character goes to a new show, the actor plays a new character or the character is played by a new actor. If Matt Smith ever won for playing the Doctor, it shouldn’t mean that his successor can’t be nominated.