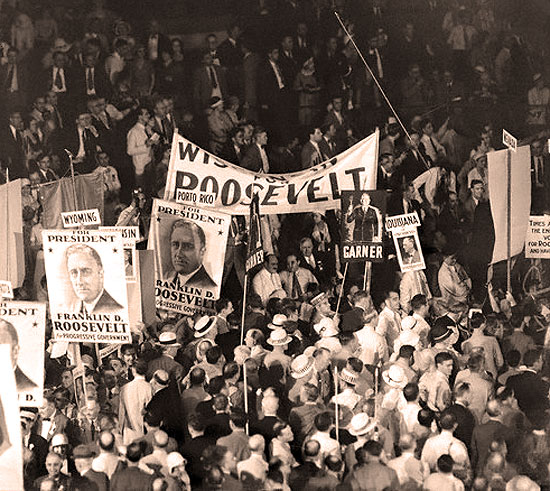 Yesterday, I compared Mitt Romney’s vague campaign to FDR’s 1932 presidential bid. Roosevelt’s campaign and pre-presidency also tie into another contemporary controversy. Right now, there are arguments that Republicans are intentionally sabotaging President Obama’s agenda to hurt the economy, and increase their chances of victory. If so, they’re following in the footsteps of prominent Democrats. As Jonathan Alter noted in The Defining Moment, President-Elect FDR made some calculations which were beneficial for his image, but not for the economy. (139)

Franklin Roosevelt knew show business and knew he had, in vaudeville terms, “an easy act to follow.” From his November election through his March Inauguration, Roosevelt used Hoover as a foil. He let the outgoing president hang himself- and the American economy- so that he could enter stage left as a hero. It’s not that FDR could have ended the impending crisis; he didn’t have power yet. And he certainly didn’t like to see the suffering. But he understood that the lower Hoover and the country slid, the better he would look upon assuming office. The theatrical and psychological insight was essential to his conjuring act when he finally took the oath.

The relationship between the President-Elect and Hoover was poor, even when compared to other Presidents defeated by challengers. Much of the blame does go to Hoover. (144)

Whatever the long-term policy consequences, the personal relationship between Hoover and Roosevelt was now moving from bad to worse. Usually outgoing and incoming presidents battle fiercely in the campaign, then are polite during the transition. Not this time. Hoover was determined to play pin-some-blame on the Democratic donkey. Roosevelt wanted to make sure that the people remembered that it was the Republicans who had forgotten their interests. If this meant sitting idly by while the conomy sunk lower, FDR could live with that.

In accounts of 1933, the causes of the final panic are myriad. Mass hysteria is one explanation. Herbert Hoover’s failure to take decisive action is another. The underlying structural weakness of the banking system a third. But no explanation is complete without accounting for fear of Franklin Roosevelt, whose election and pre-Inaugural posture sent wealthy people to the banks to withdraw and hoard their currency and gold.

It’s worth noting that there were some long-term advantages to putting the country through short-term pain. (152)

Roosevelt settled on an intentional strategy of passivity amid crisis. Laurence Sullivan, a Hoover administration official, wrote in 1936 that FDR could have ended the panic at any time with a “single vigorous statement pledging unequivocal support of the existing gold standard” and a request that Congress balance the budget. Sullivan was probably right; a few word of orthodoxy from the president-elect might have stopped the bank runs. But those words would have essentially tied his hands to the presidency and rendered it much harder to make the essential decision to go off the gold standard and break with the past on many economic issues. So FDR did what he knew how to do so well: He equivocated, issuing a vague call for “sound money,” which was like supporting motherhood and apple pie.

On the other hand, these were difficult times. As bad as things are today, it doesn’t compare to the worst of the Great Depression. (149)

Out in farm country, anyonr onnected to liquidation lived in fear of being lynched. A Kansas lawyer who handled a foreclosure was found dead in a field. An Iowa bankruptcy judge was dragged from the bench, stripped and beaten. Soon, spiked telephone poles and logs blocked the entrance to Iowa cirites. Armed farmers gathered at foreclosure auctions to threaten the lives of vidders, ready to buy their neighbor’s possession sfo ra dollar or two, then given them back to the original owners But with foreclosure so widespread, it was getting harder to feel generous.

Perhaps the biggest surprise is that there wasn’t even more unrest.

The film Gabriel Over the White House (incidentally quite interesting as a historical oddity) had a President who temporarily suspended the laws. It was meant to be a model for FDR. The crisis was so great that there were calls for the new President-Elect to ignore the laws, and do whatever was necessary to get the county back on track. (186)

As Hearst senses, the public- nearly catatonic that winter- was more ready than any time before or sinse to submit to a dictator. Mussolini was still widely popular in the United States that year. Hearst thought that the Italian strongman was “a marvelou man [who] takes care of every detail of his job.” The famous broadcaster Lowell Thomas narrated a film called Mussolini Speaks in 1933 that featured an ad campoaign calling it “A HIT. Because it appeals to all RED-BLOODED AMERICANS. Because it might be the answer to America’s needs.”

Given the severity of the situation, some of FDR’s actions were especially problematic, especially considering the major shortcoming of his administration: his failure to resuscitate the private sector. That didn’t happen until the arms manufacturing boom of the Second World War.  When Hooever blamed FDR for a 1933 panic, Raymond Moley, an FDR speechwriter who recruited the original brain trust, did not absolve his former boss. (182)

When Hoover wrote his memoirs in the early 1950s, he contacted Moley- by then a conservative- to see whether he agreed. Moley would not fix FDR’s motive specifically but offered a damning assessment nonetheless. “I feel when you [Hoover] asked him [FDR] on February 18th to cooperate in the banking situation that he either did not realize how serious the situation was or that he preferred to have conditions deteriorate and gain for himself the entire credit for the rescue operation.”

Moley was an interesting man. Considering how his relationship with FDR ended, he isn’t entirely trustworthy. (323)

In truth, Moley’s career in government effectively ended at the World Economic Conference in June 1933, when Cordell Hull, in London, discovered that his deputy secretary of state, Moley had trashed him to FDR behind his back. Hull now had the ammunition he needed, and by the time Moley returned to the United States from Great Britain FDR and Howe had a new assignment for their erstwhile friend- investigating crime in Hawaii. Moley declined the distant posting, resigned as deputy secretary of state, and moved sharply to the right after launching a political magazine, Today, that soon merged with Newsweek. In 1939, he wrote what eas then considered an explosive insier account of working with Roosevelt and his circle, After Seven Years, FDR called a “kiss-ass and tell” book, suggesting that Moley could be a toady when it suited him.

Moley became one of the early contributors of National Review, and received a Congressional Medal of Freedom from Richard Nixon in 1970. It’s worth noting that FDR liked talking to undersecretaries to get honest insight into how his cabinet members were. It was that habit of his that had doomed Moley.