What did it matter if Spider-Man was married? 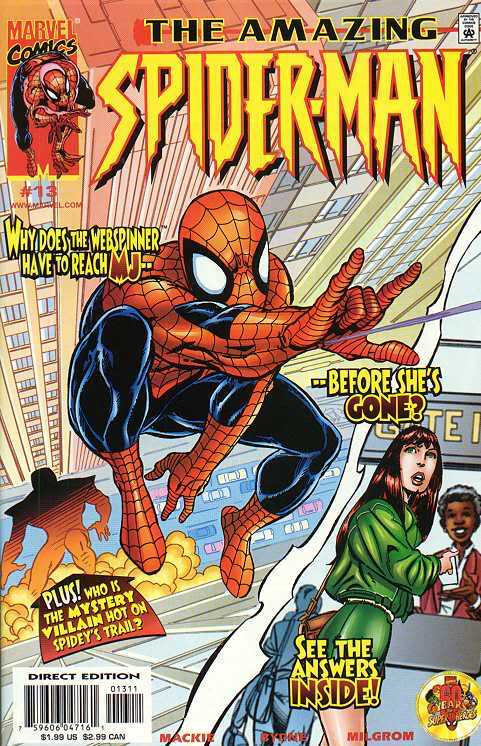 There’s much more to the direction of Amazing Spider-Man than the protagonist’s marital status, but this one element of the character’s status quo is often discussed. And that leads to the question of why Peter and Mary Jane’s matrimony mattered so much more than other things that had happened to the characters.

Detractors of Quesada’s approach said that this was just something that bothered a handful of people, one of whom happened to be Marvel’s Editor-in-Chief. The argument was that if this was not obviously an inconvenience to a majority of the readers, there was no reason for Marvel to deal with the issue at all. This neglects the detail that it is part of the job of the writers and editors to deal with potential problems before anything becomes obvious to the readers. The objection raises the question of why any of the detractors cared either way.

It’s a tautology to say that it was important because so many readers said it was important: that it’s worth discussing because so many discuss it. Aside from that piece of circular logic, the enactment of the marriage in the 1980s represented a significant development for the series. It differed from other changes to the character, which could be reversed, without forever marking the character. If Peter Parker goes to Graduate School, he could always quit, take a leave of absence or change majors. If he gets a new job, that doesn’t have to be permanent either. If new villains are introduced, there’s no obligation to feature them again.

However, marriage defines an individual. Even if you are no longer married, your status isn’t single, it’s single (widowed) or single (divorced.) After the wedding issue, Mary Jane Watson suddenly became Mrs. Spider-Man. Were they to get divorced, Peter Parker would still be mentioned in-universe on her wikipedia page as her ex-husband. And she would be on a different level than his ex-girlfriends, due to her status as the ex-wife. 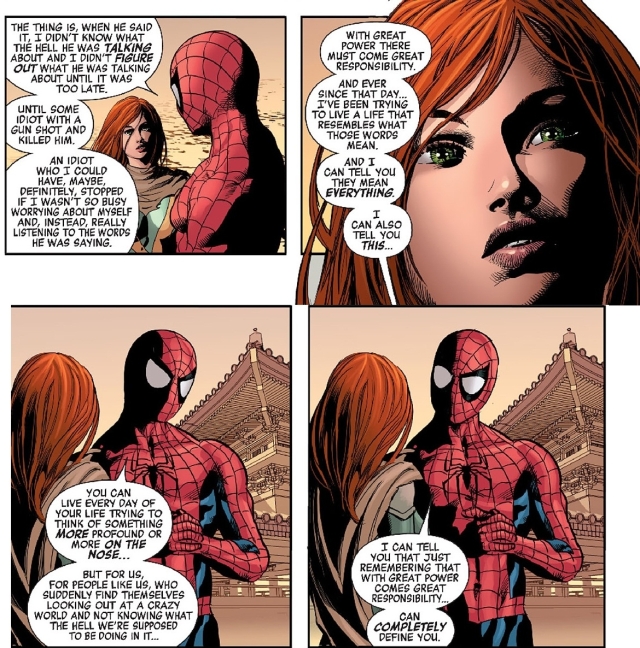 The progression from married to single was as explicit a transformation as Peter Parker graduating high school. But while that development opened new opportunities for the writers, wedlock (note the second part of the compound word) limited what the writers can do with Peter Parker’s romantic life. While it’s true that the character still has other priorities than the domestic sphere (his place of employment, his financial status, his friends, his position in the superhero community, Aunt May, etc) it’s a restriction on a major part of the character’s life, something that has always been a source of drama and conflict.

In their commentary track for South Park: Imaginationland, Matt Stone and Trey Parker (two of the best writers working today in any field) discussed what they learned about serial fiction from the show 24: it’s like juggling several balls and keeping those in play as long as possible. And this could be applied to the Spider-Man comics. One ball could represent Peter’s conflicts at work. Another could represent the super-villain causing the most trouble at the time. And then there’s the soap opera stuff.

With the marriage you remove one of the pieces from play. Stuff can still happen in this aspect of Peter’s life. But it will always be between these two people. And there will be a greater certainty that the two will stay together than if they weren’t married.

There are a few other advances that would forever change the character, and mark how others see him. Most have not been done yet. These would also include, but are not limited to, Peter Parker fathering a child, killing someone in cold blood, getting elected to major political office, becoming very wealthy, doing something that makes him world-famous (such as curing cancer) or celebrating a milestone birthday, such as turning forty. The marriage was one such moment, which transformed how the readers and others in the Marvel Universe viewed the character.

Going forward, many of the things that writers could do with the characters are dependent on the marriage. Dating Norah Winters would be quite different if Peter Parker is married to Mary Jane. MJ having a romance with a co-star would also have a different context in that scenario.

Some readers advocate restoring the marriage, and giving Peter and MJ children, or somehow bringing back Baby May. Then there’s the idea of having multiple Spider-Man books, each with its own continuity, and the marriage remains one of the most visible elements of the status quo that can differ from title to title. It’s a major part of calculations when trying to consider where the characters are going to be in twenty years.