Spider-Man’s Morals and the deal with Mephisto 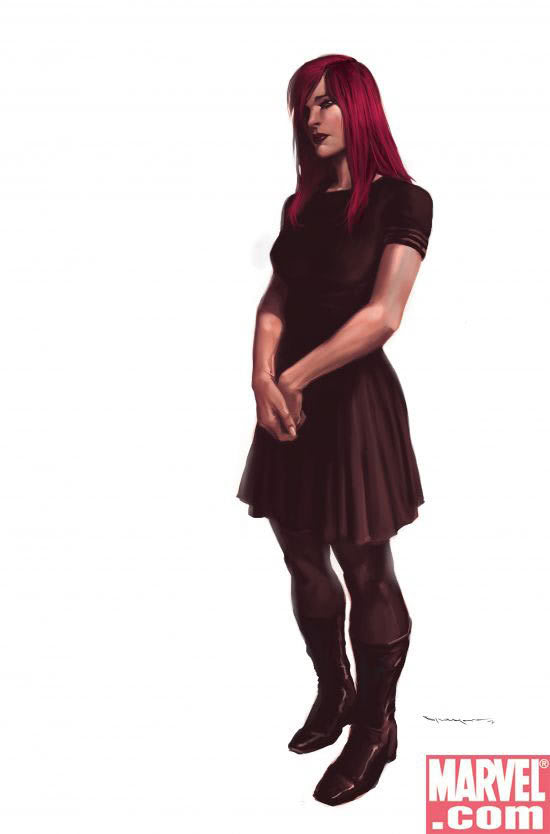 Among the many angry reactions to “One More Day” were complaints that it was amoral for Peter Parker and Mary Jane to give up their marriage to save Aunt May’s life. Some readers argued that they would never have made such a sacrifice, although this assumes that two fictional characters would respond to an outlandish situation the same way as a particular reader.

While you could argue that it would have been characteristic of Spider‑Man to reject a deal with a shady figure like Mephisto, this seemed to be a situation in which either decision would have been appropriate. Joe Quesada argued that Spider‑Man would have probably made the deal to save the life of a random stranger. He believes that it was important that Mephisto sought Spider‑Man out, instead of the opposite.

What do you think Peter would do if Mephisto came to him and said, “Do you see that woman standing there on the street corner? I know you don’t know her, but I’m going to kill her. Or, perhaps “She’s dying of cancer and I can save her.” However, if you give me your marriage, it’ll save her life.”

How would you feel, how would fandom feel if Peter said, “Nope, sorry, go ahead and let her die.”

Many have said that they can’t conceive of why Peter would choose someone else’s life over his own happiness, especially if that someone else is old. They do somewhat exaggerate May’s age and ignore the completely selfless aspects of Peter’s character. He is the type of guy who would give up his own happiness to save the life of a kind unselfish 73 year old woman whose mother lived to be 98 and whose grandmother lived to be 102, according to Marvel Knights Spider‑Man #9. Meanwhile, Mary Jane regretted not taking the bullet for May, because of the possibility she would have handled it better.

Peter did feel guilty because Aunt May was shot by someone who wanted to punish him. And some detractors of OMD suggested that as a result, the deal with Mephisto reflected poorly on him. It was also suggested that Aunt May would not have wanted Peter to take the deal. Though in fiction, there are many examples of superheroes ignoring selfless requests from people in need of dangerous rescues. Their willingness to risk their lives is essential to the genre. If Spider-Man is different from others, it’s because his position is more intense.

In the Spider-Man comics, the character has always valued the lives of others above anything else. This was most evident in Paul Jenkins’s take on the character, which may have been typical of a tendency by British genre writers to force fictional heroes to make difficult and consequential choices. You could see it in the episodes of Doctor Who in which the Doctor must allow a tragedy to happen in order to prevent a nastier disaster. Garth Ennis summed this up when discussing the Judge Dredd stories he grew up on.

I still think about that today; what it meant about the character, and about the comic I was reading (aged 12). Even now I don’t know if Dredd was right or if he was wrong. It was the only way to win, to avoid the further slaughter and enslavement of his own people–but it was genocide. It was moral courage on an almost unimaginable level–but it was appalling. In the end, it was a dilemma not unlike those faced by a number of good and bad men in our own history, and if I had to sum it up in one line, I’d say this: what are you prepared to do when there isn’t any easy way out?

And that, I think, is why I’ve never been able to care about Batman, or Wolverine, or Iron Man… or any of them, really. Not because of what characters like that would or wouldn’t do, but because their publishers would never have the courage to have them written into such a situation.

Jenkins had a similar sensibility, and was more willing to explore these choices more in his stories than any Spider-Man writer, before or since. Superheroes traditionally valued the lives of the bad guys, but Jenkins made it difficult.

In Peter Parker Spider-Man #41, Spider-Man called an ambulance for a supervillain who had killed hundreds of people.

Later in the issue, he saved the life of another murderer. 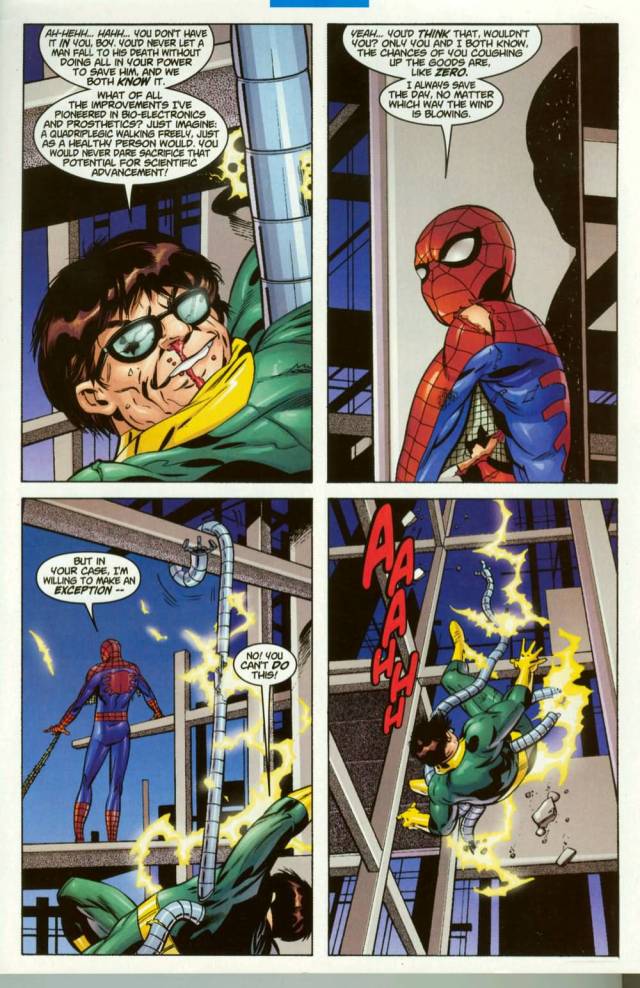 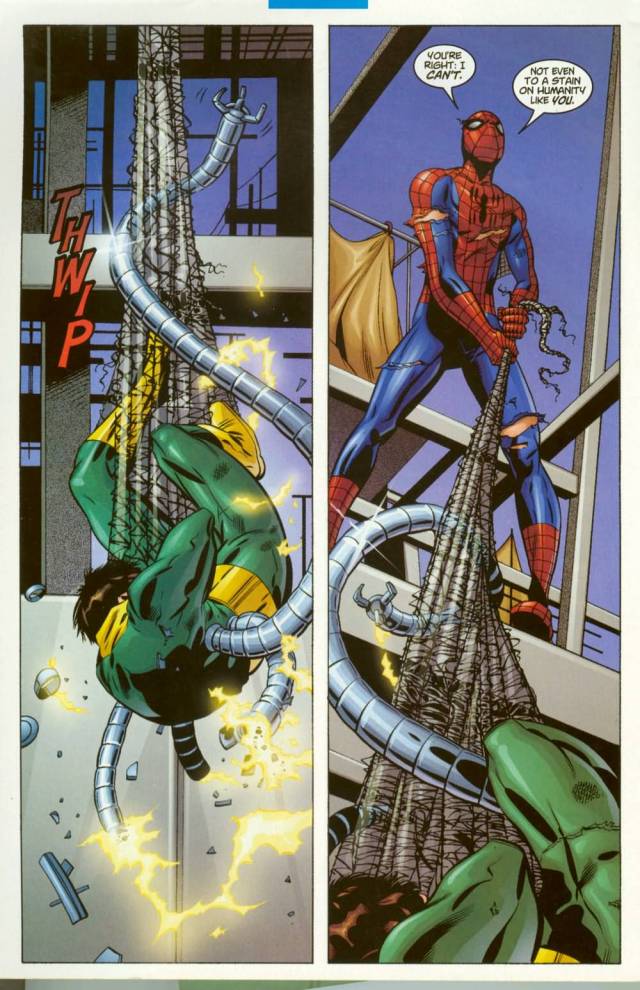 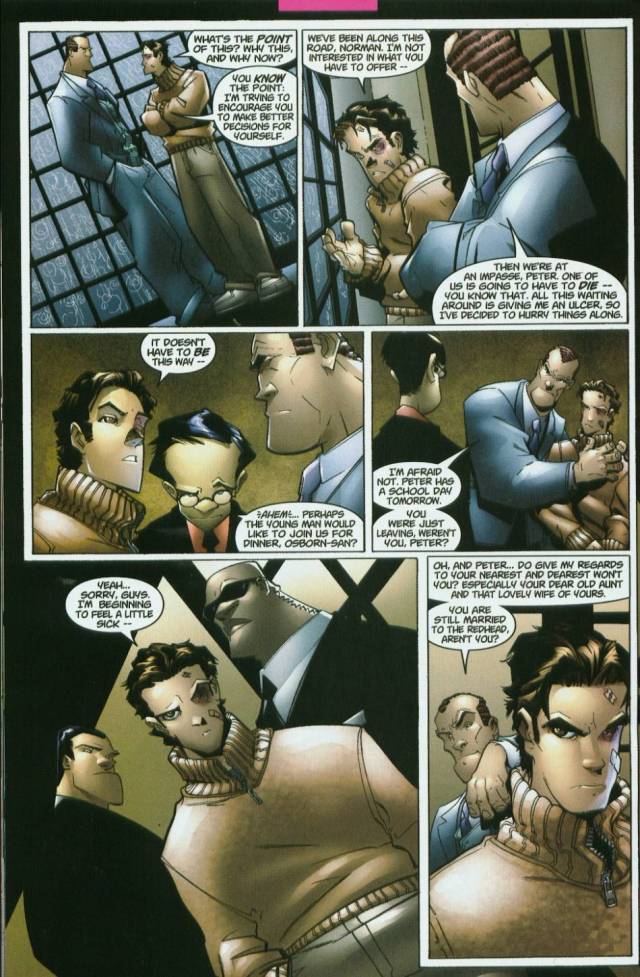 In Jenkins & Ramos’s first Spectacular Spider-Man arc, Peter Parker’s refusal to allow a cancer-ridden Eddie Brock to die of natural causes was so great that he forced a reunion between Eddie Brock and the Alien Symbiote, restoring one of his greatest enemies (Venom) to full power.

I thought Jenkins might have gone a little overboard with his explanation of these themes. But it’s all still canon.

If Mary Jane Had Been Shot?

Every now and then someone asks if the decision would have been more understandable if MJ was the one who was shot. You wouldn’t have much argument, because there wouldn’t have been much of a choice for the characters, as one option (keeping MJ alive at the cost of the marriage) was so much better than the other (MJ dies, but Peter remembers the marriage).

The decision would have been understandable. The story would have sucked. If MJ was shot, why would Peter even consider rejecting Mephisto’s offer? The writers would probably have to even the scales somehow.

The outcome might be in more doubt if MJ’s fate wasn’t quite as bad as May’s. For example, if a bullet had paralyzed MJ. Or if she had faced a life-threatening surgery in her immediate future. The latter example doesn’t quite work with Mephisto, as it invites too much second-guessing. Why would he make the offer unless he knew she was going to live?It probably wouldn’t be in character for MJ to agree to the deal in either situation. And if it’s just Peter who gets to decide, the “One More Day” angle changes completely.

This could have some implications for Peter’s next romantic relationship. If he had to go through One More Day to save his wife, it would be borderline immoral for him to date anyone else. That would leave the writers more restricted than they were prior to OMD.

Would Peter Parker Have Died For Aunt May?

The chain rule works in trying to determine if the character did the right thing. We could probably agree that for Peter giving up the marriage would be preferable to dying. If Peter would die to save Aunt May, it stands to reason that he would also sacrifice his marriage to save her. And Ultimate Spider-Man has made it clear that Peter Parker would have died to save Aunt May. It’s a different version of the character, but presumably he has the same morals.

The Master Planner saga, probably Stan Lee and Steve Ditko’s masterpiece, also had Spider-Man risk his life to save Aunt May, after she became sick as a result of an earlier radioactive blood transfusion. So I think Peter making the deal with Mephisto was entirely in-character. It’s just one aspect of “One More Day” and “One Moment in Time” which has engendered a substantial amount of discussion. Another is the use of time-travel.