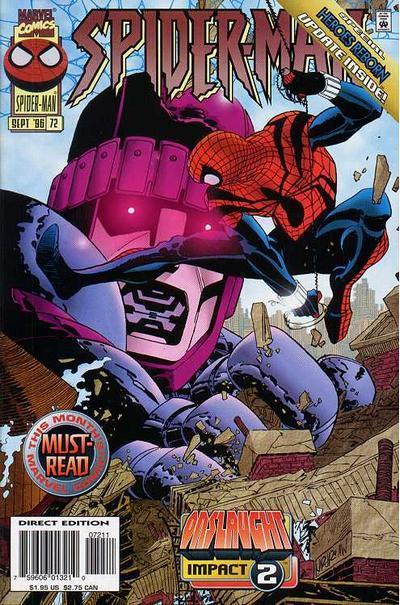 If you’re unfamiliar with the Clone Saga, the Comics Cube has a good write-up. Basically in the 1990s, Marvel decided to reveal that the Peter Parker who had appeared in the Spider-Man comics for twenty years was actually a clone, while the real Peter Parker had traveled the country under the pseudonym Ben Reilly, believing himself to be the clone following the events of Amazing Spider-Man #149. That decision was reversed within the year, and Ben Reilly was killed off, dissolving into dust, proving that he was the clone after all. There have been quite a few Ben Reilly fans, who suggest that the character could contribute to the Spider-Man comics, as a replacement protagonist for Peter Parker or a supporting character, preserving a “commitment to change” approach.

I read almost every issue of the Clone Saga, and agree with Marvel’s decision to disown it. There was some good stuff, but the worst of it was really bad. While some remember it for particularly egregious moments (Peter Parker slapping his wife, the clone reveal) a lot of the storytelling was awful, too. I thought that Live and Let Die, Players and Pawns, Back from the Edge, the Mark of Kaine Part 5 and the Lizard back-up story from the Planet of the Symbiotes crossover were all significantly weaker than anything in the Spider-Man comics since One More Day. Reading the Clone Saga in its entirety (or close to it), I came to realize how much of an improvement current comics storytelling is over the 90s, at least on the Spider-Man titles.

If Ben Reilly had a major role in the Spider-Man comics, there would be an incentive for new readers to pick up material that’s best left forgotten. However, after reading the clone saga, I also gained an appreciation for why some people loved this period. Between “Blood Brothers” (which was originally supposed to end the Clone Saga) and “Revelations” there was an appealing accidental status quo which lasted for a few months with Ben Reilly as Spider-Man, and Peter Parker as a frequent ally/ family man.

Some saw this as the ideal compromise regarding questions about the directions of the Spider-Man comic. Peter Parker would still be in the book, while Ben Reilly had the chaotic private life. However, if Peter Parker was the supporting character, he might have overshadowed the main protagonist. You could also have Ben Reilly and Peter Parker simultaneously be superheroes, carrying separate titles, as had been the case in the earliest months of the clone saga.

Were he to return, Ben Reilly could have an entirely different role in the present. Many will argue that Spider-Man’s supposed to be a loner, but in recent years, he’s been in several superhero teams including multiple Avengers line-ups, in addition to the Future Foundation. If you think Peter Parker being on too many teams is a problem, Ben Reilly could be the solution. It would also help distinguish the two characters, a necessity as one is literally the clone of another.

The clone thing is hard to overcome. Fans of Ben Reilly will cite the subtle ways in which the character is different from Peter Parker, but some things are inescapable. Ben Reilly is as smart, witty and handsome as Peter, and essentially has the same ethics. He was always a good guy, even with all the trauma he had been through. He was a clone who reflected well on Peter Parker. He was different from Kaine, another spider-clone.

This may be why Marvel launched the Scarlet Spider monthly with Kaine as the lead. There are more differences between Peter Parker and Kaine, the clone who has been a bad guy and who has killed people in the past. Kaine represents something different from Reilly, especially when it comes to Spider-Man. He’s done some nasty stuff in his past, so if he becomes a hero, it suggests that everything Kaine did, Peter is capable of as well. Kaine also appeared in recent stories, so newer readers would be more familiar with the character.

Kaine is probably more willing to do the stuff that Peter Parker refuses to do, than Ben Reilly. “A Spider-Man who killed bad guys” can be an effective hook for a title. You could argue that he’s a much less subtle version of Ben Reilly, but the concept is more compelling for readers completely unfamiliar with the characters.

Having Ben Reilly as Spider-Man can get kinda convoluted, and there are similar problems with having him in a major role in the Spider-Man comics. Since he has all of Peter’s memories prior to Amazing Spider-Man #149, it’s difficult to keep track of what he knows about characters he interacts with. He would have first-hand memories of many experiences, while he would be ignorant of many subsequent developments, especially from acclaimed runs like Roger Stern’s Amazing Spider-Man, JM Dematteis and Sal Buscema’s Spectacular Spider-Man, and Chris Claremont and John Byrne’s Marvel Team-Up.

Ben Reilly remains one of the few comic book heroes—from any company—to have headlined four monthly titles for over an year. So it’s worth considering the ways Marvel could bring him back, and the possible directions for the character.