The Big Time and One More Day

I was listening to a recent episode of the Spider-Man Crawl Space podcast, where the hosts mocked part of Joe Quesada’s rationale for getting rid of the Spider-Man marriage by noting scenes in Amazing Spider-Man #679 which they felt contradicted some of the reasons given for the changes in One More Day.

George Berryman: This does lose a grade for completely getting Silver Sable wrong. Even when she’s worked with Spider-Man in the past, there’s been a respectable tension between them, like, “I wonder if there’s anything more about him” or anything. It’s never really gone further with him or anything like say with him and Jean Dewolfe.

Brad Douglas: Like the Assassin Nation Plot. Remember they were at a dinner, and he was in a tux and she was in a dress.

George Berryman: Right, and they were still professional. She’s all about being professional. I like seeing Silver Sable back, but not if she’s going to be misrepresented, if the writer’s going to go out of his way to prove that he doesn’t know much more about the character to begin with.

Brad Douglas: That’s two women in two issues that have been misrepresented.

George Berryman: Right, because it’s relatable to me. This makes the character more relatable to me being kissed by this ultra-hot head of state in an alley. I couldn’t relate to the character when he was married to a supermodel he had known since he was a teenager, but I could relate to him being the guy who kisses a foreign national who happens to be a supermodel level hottie in an alleyway. That I get totally. I think we can all say that, right? 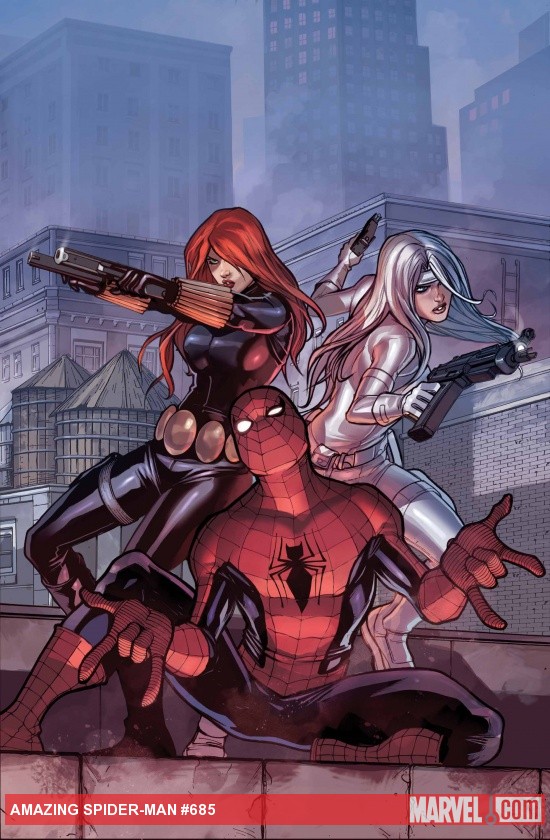 A few days ago, I considered if Joe Quesada was hypocritical for pushing One More Day after all the other stuff that happened to the character under his watch. Now it’s time to look at whether his reasoning for those developments could be reconciled with subsequent events in the Spider-Man comics, or related projects in other media.

I don’t think there was any inconsistency with the Silver Sable scene, which occurred in a comic published after Alex Alonso had become Editor-in-Chief of Marvel. While the average reader does not know what it’s like to get a peck on the cheek from a gorgeous internationally recognized woman, the scene did not violate any of the reasoning behind One More Day. It represented a brief acknowledgement of all that Spider-Man does from one person. It’s not something that he can brag about to most of his peers.

One of the numerous problems with Peter Parker being married to a loving supermodel was that it was a big consistent “win” for the character. And everyone knew it. One can think that it was a bad idea, but that the character should occasionally have smaller victories. The President will shake his hand. Some of the people he rescues will thank him. It fits the secret identity motif, as Peter Parker won’t be able to communicate any of this to most of his friends and family. And it’s often balanced by small losses, as civilians he saves accuse him of grandstanding, or his duties as Spider-Man conflict with his job as Peter Parker.

That segues into the most controversial element of the status quo, in the context of the understanding of Quesada’s guidelines for the Spider-Man books: Peter Parker’s job at Horizon Labs. The argument goes that if Peter Parker shouldn’t be married to a gorgeous woman, he shouldn’t have a great job either.

A difference here is that there’s no reason to assume that Horizon Labs is going to stick around forever. There are many ways a writer could take away all the things that Peter Parker currently enjoys. He could get fired. He could lose everything upon discovering that Max Modell is a bad guy. He could lose everything when Max Modell is forced to make a difficult sacrifice. It’s easier for writers to change Peter’s job than his marital status.

I admit that it’s a bit ridiculous for Peter Parker to be on friendly terms with the Mayor of New York City, but there’s a point to Jonah’s new job that makes up for that drawback. One of the problems with the Daily Bugle as a setting is that the newspaper industry is really volatile at the moment. We don’t know if it’s going to exist a decade from now, in a way that’s similar to what it was in silver age comics. Jonah becoming hizzoner sidesteps that issue, as we can all be pretty sure that New York City will still have a mayor in fifty years, when Spider-Man’s adventure may still be ongoing.

In the comics, Jonah has always been a famous and respected man. People reading the Daily Bugle are under the impression that he’s done more to fight supervillains and organized crime than Spidey has. He’s also been involved in unearthing scandals that would top the news for weeks, as when one of his employees exposed the mafia ties of a man who was elected mayor in Frank Miller’s Daredevil run. This man could get elected mayor in a heartbeat, and it wouldn’t change his stature within the Marvel Universe, where he was already quite respected.

Given their history, Jonah’s not going to be all that interested in helping out Peter Parker. And putting him in the mayor’s office doesn’t exactly make things easier for Spider-Man.

There were some questions about why the writers were so keen to marry off Aunt May, shortly after erasing Peter’s marriage. May did well for herself, marrying a nice successful guy. Considering her lack of history with Jonah Sr, you could argue that it’s unlikelier than Peter marrying MJ, as he had known her before she went to go into show-biz.

A major distinction is that Aunt May isn’t the lead of the book, so her romantic adventures weren’t a big part of the series. The tradeoff is worth it to get Jonah Sr to become a member of the supporting cast, considering what he brings to the series. It also meant that Jonah Jr would remain in Peter Parker’s circle, even after Peter no longer had a job in his administration or in the press. If the writers feel that Jonah Sr hinders the stories that they want to tell, they’re not as restricted as they would be with Spider-Man’s marriage. They can kill him off, or even do a divorce storyline. While Aunt May has traditionally complicated Peter Parker’s life, the writers could always come up with other supporting characters for that role. The most important thing she brought to the series at this point was that she knew Peter Parker before he became Spider-Man, and that’s still a part of their relationship. 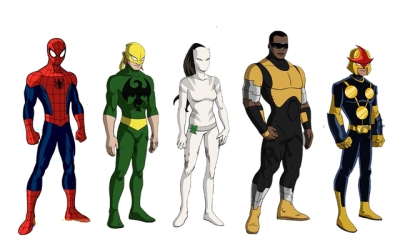 In a later edition of the Crawl Space podcast, 43 minutes into the 174th episode, J.R. Fettinger criticized the new Ultimate Spider-Man cartoon by this criteria.

J.R. Fettinger: I don’t want to rag on a cartoon meant for ten year olds, but one of the reasons Spider-Man has always been popular is he kinda has a youthful rebellion about him. He didn’t fit in with the other superheroes because he was young and hot-tempered, and he wasn’t a glamour boy. Captain America is the high school quarterback; Spider-Man is not. For Spider-Man to kinda join the system, it just doesn’t seem right. This is not a knock on the cartoon, this is just a knock on Marvel’s disingenuousness. We have to hear about Tom Brevoort and Joe Quesada saying that Spider-Man can’t be married because that takes away from his core base, his core popularity, the core of what makes Spider-Man. But having him join the Avengers and in the cartoon, having him join Nick Fury’s program and call Nick Fury “Sir” with the super-buddies and having SHIELD provide him with high-tech toys, well, that’s not Spider-Man either, you know?

J.R. Fettinger: So it’s that disingenuousness that I absolutely loathe.

The Ultimate Spider-Man cartoon is a departure from what we’re used to with Spider-Man. And JR is correct to note the financial incentives for featuring other heroes in supporting roles—it makes it much easier to sell action figures. It almost seems like a Harry Potter version of Spider-Man, with the young orphan hero hero joining a school for those with super-powers. By duplicating some of the things that are appealing about that sales juggernaut, it’s possible that Marvel will lose what worked with their existing wildly successful franchise.

It’s worth noting that this is the eighth Spider-Man cartoon to date, which does allow Marvel and Disney more license to deviate from the norm. There will be other animated series in the future, some of which will be closer to what we would normally associate with the character. But what goes on in this series isn’t as important in the long-term as decisions made in Amazing Spider-Man, either the comic book or the movie. Plus, if you think that the cartoon’s direction was a bad idea, as is the case with Mr. Fettinger, that hardly presents an argument for further deviations from the core of the series.