The Advantages of the (Almost) Weekly Amazing Spider-Man 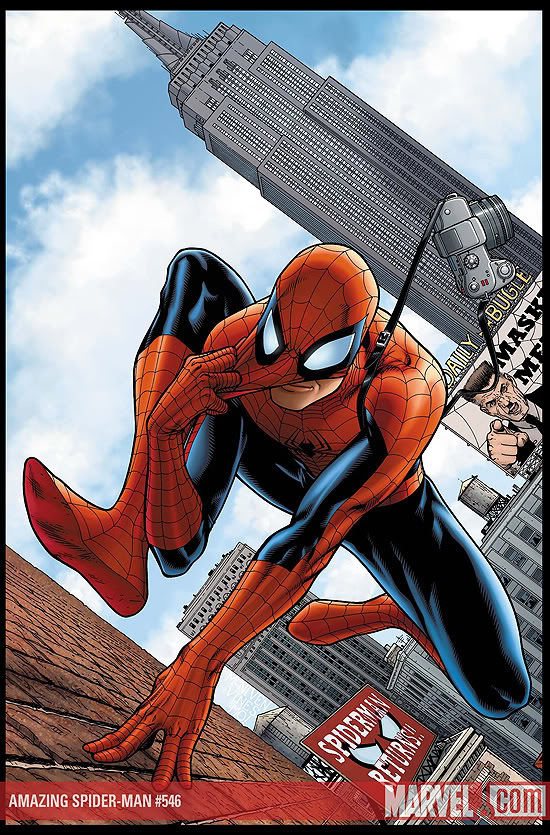 Late in 2006, I thought that one way Marvel could take advantage of a massive change to the status quo and creative teams after “One More Day” would be to make Amazing Spider‑Man weekly. In this case, it made sense to keep the numbering system, rather than start with a new #1. It gives the books more of a sense of history during an experimental period, and counters the impression that the reader who missed a few issues will now find the series completely inaccessible. This is something I speculated about months before Marvel announced the Brand New Day schedule, as it seemed like a logical approach after the success of 52, and even the modest profit of Chuck Austen’s US War Machine book a few years earlier.

I later learned that making Amazing Spider‑Man into a weekly title with multiple writers and artists is something that the editors at Marvel had been considering for the last decade. It had a few advantages over the traditional (1976-2007) method of releasing Amazing Spider‑Man and two or three other monthly titles. Technically, during the Brand New Day Era, it was an almost weekly rather than an actual weekly, which had the additional advantage of providing Marvel more leeway to publish Spider-Man related material that might otherwise damage the Amazing Spider-Man brand, such as supplemental material and spinoff mini-series. But it’s close enough that for the next few entries, the two slightly different schedules will be conflated.

In a CBR interview, Quesada explained why he liked the format.

Yes, it’s a perfect time for some many reasons, chief of which is the fact that there will now be one continuous Spider Man story, as opposed to three or four separate books. The life of Peter Parker will be much easier to follow and hopefully more consistent because of that. Every issue will have great implications towards a larger story, but all arrows will be pointing in the same direction. What we have planned within “Brand New Day” is going to be a heck of a lot of fun.

Dropping the satellite titles in favor of an increased out put on an Amazing Spider-Man title with rotating creative teams had significant advantages.

The flexibility the thrice‑monthly format provided for the writers and artists should not be underestimated. If one guy wanted to do seven issues an year, and another wanted to do eleven, everything’s good. As the majority of artists don’t draw exactly twelve issues an year, this system worked better for them than the traditional approach, as they could do sixteen issues an year if they want to. It also provided many opportunities for artists who can’t do a monthly book (IE‑ Lee Weeks, Steve McNiven, Chris Bachalo) or for artists already on a monthly book, but still capable of drawing even more issues (IE‑ Sean Phillips, John Romita Jr, Salvador Laroca) to do some Amazing Spider‑Man material every year in addition to their other work. The artists and writers also have more options to take on other projects, knowing that the other guys can pick up the slack, with due notice.

Writers who want to focus entirely on certain characters and subplots are free to do so, without the need to pad their run with stories featuring characters and plots they’re not as interested in, now that they can rely on the others to supplement their run. For example‑ if Dan Slott wanted to write nine consecutive issues about his new villain: Mister Mystery, he could have done so, trusting Guggenheim, Waid and Kelly to handle non‑Mister Mystery plots, so readers will be less likely to get tired of the villain. If Guggenheim wanted to do mostly street‑level noir‑type stories, he was free to do so, knowing the other writers can take care of other aspects of Spider‑Man’s appeal. A writer also didn’t have to fill 22 pages an issue. If he only had enough material for sixteen pages, he could give the remaining six pages to someone else to further a subplot or two, something which should probably have been done more often. 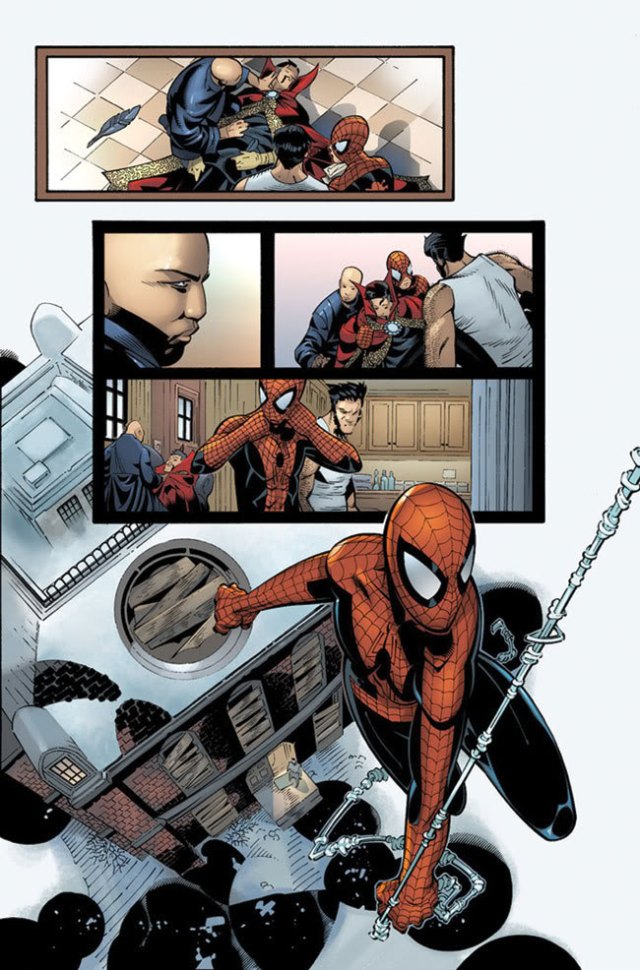 Cooperation between writers was strongly encouraged, and readers generally had a better sense of when stories occur (as opposed to the difficulties of reconciling events in Straczynski’s Amazing Spider‑Man with events in Sensational, FNSM or MKSM). This forced the editors and writers to be consistent in their portrayals of various characters, and encouraged all involved to assist one another. Dan Slott’s been happy to mention how Bob Gale’s advice made an action sequence in his first arc with Marcos Martin more exciting. With this cooperation, it’s easier to plan how your own work will be affected by the developments of the others. Years ago, it took Paul Jenkins months to be able to do anything with changes in Straczynski’s book—Aunt May learning Spider‑Man’s identity, Peter and Mary Jane’s reunion—which made Peter Parker Spider‑Man seem like a less significant title.

In a recent interview, George Perez discussed the problems writing Superman while Morrison was on Action Comics.

“I had no idea Grant Morrison was going to be working on another Superman title,” he said. “I had no idea I was doing it five years ahead, which means … my story, I couldn’t do certain things without knowing what he did, and Grant wasn’t telling everybody. So I was kind of stuck. ‘Oh, my gosh, are the Kents alive? What’s his relationship with all of these characters? Who exists?’ And DC couldn’t give me answers. I said, ‘Oh, my gosh, you’re deciding all these things and you mean even you don’t know what’s going on in your own books?’ So I became very frustrated …”

Perez had it slightly easier than most writers on the Superman books, since his six issue run of Superman was set at a different time than Morrison’s Action Comics. Things are more complicated when series with the same characters are set at the same time, and writers have to work to make sure they don’t step on one another’s toes.

With less of a wait between cliffhangers, decompressed storylines would be less painful for readers. Although it is worth noting that during the Brand New Day era, shorter storylines (2-3 parts) were the norm, and the longer storylines weren’t padded. There are more opportunities to deal with events in other books within the Marvel Universe, although that wasn’t exactly a concern with Post‑New Avengers Straczynski. If there’s anything like the old crossovers with several writers and artists working on a single story, it will only be because they made the decision to work that way as opposed to trying to drive up sales for the “B” titles.

With 36 issues of a single series coming out every year, the writers were also able get to craft more complex storylines. They can do mysteries with the twists and turns of the first two seasons of Veronica Mars without it taking five years, or cramming a year’s worth of stories with clues and red herrings in every page.

One Story at a Time

Because there wouldn’t be three or four different epic Spider‑Man arcs occurring simultaneously, Marvel would have an easier type time hyping each storyline one at a time, which saves them, retailers and creators time and effort on publicity. With a single full page ad in Previews and other Marvel Comics, Marvel can promote three parts of a storyline, as opposed to running separate ads for three different stories at a time, which usually leads to at least one story not getting sufficient publicity. The system wasn’t perfect. If one month has a two parter with Spider‑Man VS Venom, and a single issue Aunt May spotlight, the Venom story will get more publicity. But in terms of marketing, it’s still much preferable to the alternative. 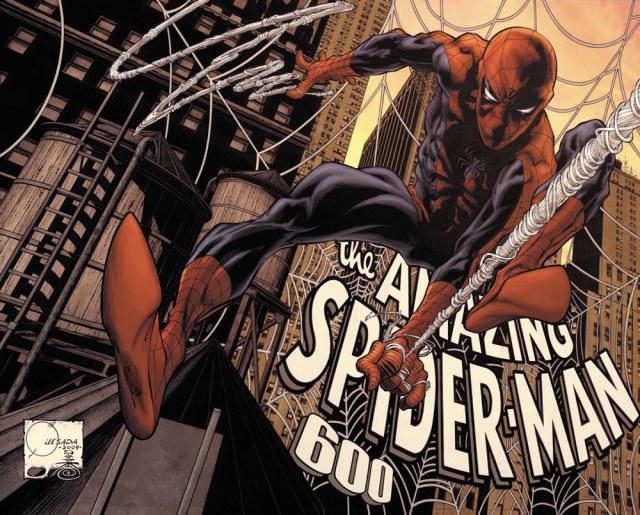 Marvel also benefits in terms of reasons to celebrate Amazing Spider‑Man. With the Brand New Day format, there’s a 100th issue milestone celebration every three years. These are excellent opportunities for Marvel to do jump‑on points for new readers (ideally a longer than usual first chapter to a new storyline), and there’s a history of many of those being awesome, as the series has yet to have anything less than a spectacular 100th issue celebration. The Amazing Spider‑Man Annual was also be a bigger deal, as opposed to one of three annuals coming out every year. And I’m sure some Marvel already loves the possibilities of collecting an year’s worth of the comics in a single Omnibus.

While it was always unlikely that every issue would sell as well as the average issue of Straczynski’s run on the title (if that had happened, the new move would have been an overwhelming success) there was no need for that to happen in order for the schedule to be a success. As long as the new ASM topped the average sales of the three Spider‑Man titles (or what editors could presume the average sales would have been in the economic climate), it was a success. And it’s likely that it will accomplish this, as the readers will have more reasons to pick up three issues a month. Under the new format, the lower‑selling creators (and books that would ordinarily be one‑shots) would see an improvement in sales as issues of Amazing Spider‑Man, although Marvel would have to be careful not to allow the brand to become weaker. The format encourages experimentation, and exposes readers to new comics luminaries (especially writers), while giving the new creators more opportunities on what is arguably Marvel’s biggest title.