Religion and Politics in the Spider-Man Comics

One question for the next Spider-Man writers and editors is how to depict religion and politics in the comics.  It’s something that many readers take quite seriously, and for the most part, writers have been vague about the religious and political beliefs of the characters.

Paul Jenkins and J. Michael Straczynski sometimes had Spider-Man try to talk to God. But we don’t see Peter Parker go to church. In his Soul of the Hunter one-shot, JM Dematteis was more explicit about the religious beliefs of a Jewish friend of Peter’s introduced in that very issue than he was about the beliefs of the main character. It was established in “The Other” that Aunt May goes to church quite regularly, although this may have been influenced by the character’s depiction in Sam Raimi’s first Spider-Man movie. The scene in which the Green Goblin interrupted Aunt May when she recited the Lord’s prayer was the most prominent depiction of the religious beliefs of the person who raised Peter Parker.

In the American Son storyline, Joe Kelly suggested that Peter Parker was quite happy to see President George W Bush get replaced by Barack Obama. That’s hardly unique for a twenty-something New Yorker. And it’s an exception that demonstrates how rare it is for the series to address political issues and beliefs. In 2007 and 2008, during the first half of the Brand New Day era, there was a long-running subplot about the mayoral election in which it was never made clear what parties the two candidates belonged to, or what issues were central to the election. When J Jonah Jameson became Mayor of New York City, it was as an Independent, rather than a candidate of either major party.

When controversial topics are brought up, it’s usually as a way to raise questions rather than provide answers, or to present an extreme version of a situation which doesn’t really address anything about contemporary debates. Readers could disagree on gun control, but we’ll hope that Spider-Man can save schoolchildren from a shooter. There may be disagreements on the role of churches in family life, but there’s a general consensus that cults are bad.

When a politician appears, Spider-Man generally respects the office, which is a bland and inoffensive position to take. Often the officeholder’s role is nonpartisan. Sometimes a real-life political figure offers advice on how to avoid drugs, or how to find help if you’re unemployed. If a fictional official abuses his power, it’s not meant as an ad hominem attack on all politicians or against all members of a particular political party. We would all agree that it’s not acceptable for a city councilman to take bribes from the Kingpin, or for a district attorney to order a witness killed.

The Spider-Man series does seem to be ill-suited to deal with controversial and complex issues in great depth. There just aren’t that many pages available in an action-adventure series for characters to get into lengthy arguments about something that doesn’t tie into the main narrative. And it’s not especially interesting visually to have Peter and a supporting cast member argue for several pages about theological minutiae, or whether certain regulations will help the environment or hinder businesses.

Religion and politics can always be incorporated into the A-plot, since ministers, rabbis and politicians can always be attacked by criminals, and rescued by superheroes. However, there is a tremendous potential for intellectual dishonesty, as the writer gets to determine the outcomes on issues that are usually much more opaque in real life, hence the disagreements about the subjects in real life. A conservative writer could depict a voter fraud conspiracy by crazed environmentalists, while his liberal counterpart could pit Spidey against Republicans introducing drugs to a primarily African-American neighborhood, a Catholic writer could feature God talking to the Pope, and an atheist could have Thor make a guest-starr appearance to reminisce about a mentally ill con artist he met two thousand years ago in Galilee.

Allusions to religious and political issues often involve frames of reference which are completely alien to many readers. Evangelicals might understand the significance and context of a particular biblical lesson, but this would require more explanations for readers of other faiths. Republicans and Democrats will often have different conclusions about what could make the world a better place, which complicates political arguments.

Then there’s the question of whether Marvel would want the character to take a controversial religious or political stance. Many readers would be offended if Spider-Man expressed his belief that only Christians will go to heaven. Others would be upset if Spider-Man suggested that only fools believe in God. 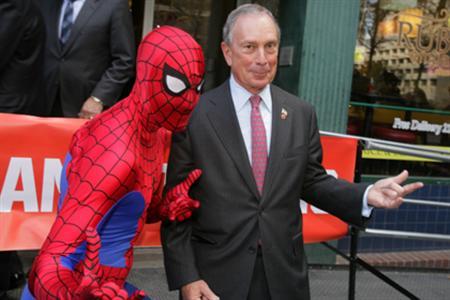 The publication format makes it difficult to depict contemporary controversies. It takes a few months to publish a comic book, so any discussions about today’s news events can end up quite dated. What was timely when the writer began work on the issue might be forgotten a few months later. In addition, Spider-Man’s adventures will continue to be published for generations. Due to the sliding time scale, stories that were published decades ago are described as occurring a few years ago. So a storyline involving a specific political situation such as a Democratic President’s difficulties working with a Republican-controlled House of Representatives could soon seem as anachronistic as a subplot about Peter and Mary Jane becoming volunteers for Ross Perot’s presidential campaign.

The counterargument is that truly three-dimensional characters would have nuanced political opinions, which could sometimes be an organic part of the story. But I don’t really trust writers to accurately depict complex political positions contrary to their own beliefs, or to be truly objective when determining what positions a character would hold. They can’t all be Dostoevsky. It’s usually not a skill set that’s particularly necessary for this series, especially when you consider all the great writers who have tremendous and obvious blind spots when it comes to political discussions.

Marvel’s Civil War event a few years ago exemplified this problem. In the main mini-series, Mark Millar played fair with both sides of the argument: the pro-registration and anti-registration forces. But the writers of the most prominent tie-ins—including JMS with Amazing Spider-Man—clearly favored the Anti-Registration underdogs, while emphasizing the Pro-Registration side’s atrocities. There could be similar problems in depictions of arguments between atheists and Evangelicals, or Democrats and Republicans.

I do have a wimpy compromise of how to deal with the character’s political and religious beliefs. My take on it is that Peter Parker has never had the time to become informed about politics, or to think seriously about religion. For the last decade, he has had to balance work, school, his social life and his difficulties as Spider-Man. So he hasn’t had time to read The New Republic, National Review, Mere Christianity or The God Delusion.

I admit that this option may bother the readers who expect all Americans to be informed members of the electorate or active in their church, but it has the benefit of preventing anyone from using a fictional character’s beliefs to bolster their own arguments.