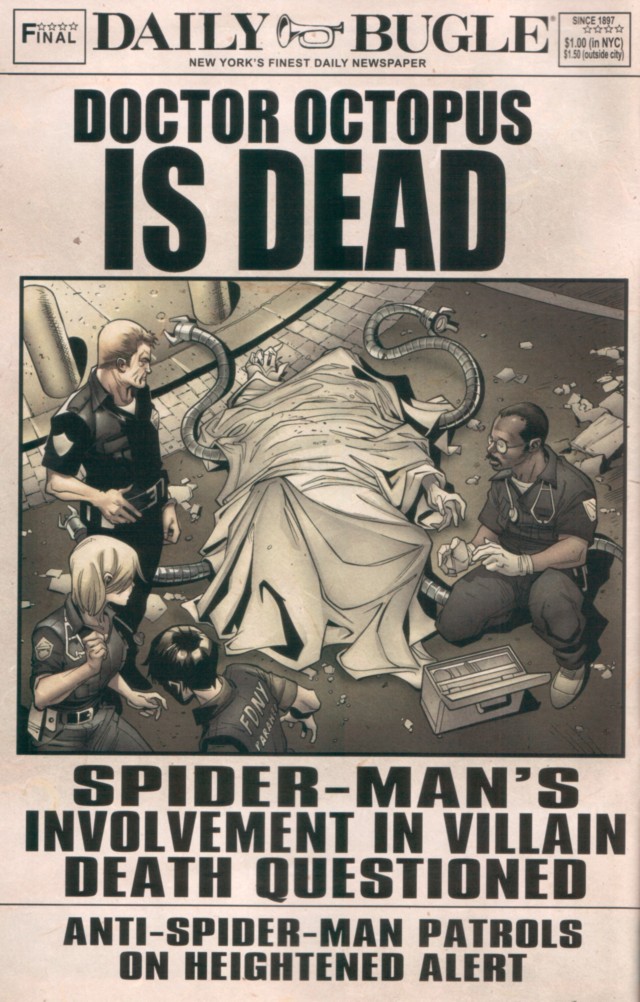 While I’m fairly convinced that the Superior Spider-Man thing will be temporary, “Dying Wish” is likely to define Doctor Octopus for some time to come. So what does it mean for one of Spider-Man’s biggest villains? It’s a tad ironic that just when he gets his biggest story ever, he may disappear as an enemy of Spider-Man. This isn’t for the reason fans would have expected at the conclusion of Ends of the Earth, when the villain had several weeks left to live. When Avenging Spider-Man #15.1 was solicited, I don’t think many of us were expecting Doctor Octopus to be the one memorializing his fallen foe, instead of being the subject of the reminiscences.

So Doctor Octopus will now be the lead of Superior Spider-Man. He’ll follow in the footsteps of the other two big Spider-Man villains. Norman Osborn led the Thunderbolts and the Dark Avengers. Venom’s monthly title is selling alright. Before that and the Daniel Way Venom book, he had been the lead of a series of mini-series which came out so regularly fans could purchase subscriptions.

I’m sure Peter Parker will be back as the Spider-Man soon enough, but it’ll be interesting to see what happens to Doc Ock afterwards. Because even the best villain is replaceable, and it’s also quite rare for a bad guy to become a regular part of the series, the fates of individual villains don’t matter as much as the fates of Spider-Man or his supporting characters. But Doctor Octopus has been the antagonist in some of the best Spider-Man stories ever. So there will be some loss to the franchise if he’s taken off the chess board.

Doctor Octopus could become a hero, and get a monthly. It might just be a continuation of the Superior Spider-Man numbering, similar to what Marvel did when FF was continued, even after Fantastic Four returned. If he becomes a good guy it would reinforce Spider-Man’s decision to never take lives, if one of the nastiest people he ever rescued goes on to do so some good.

Doctor Octopus could go back to his earlier status quo, and just continue to be one of the top Marvel villains, occasionally gloating of that time he killed off Spider-Man for a while. I don’t think I’d care for this.

It’s worth noting that in other renditions of Spider-Man’s story, Doctor Octopus has died a hero. In Ultimate Spider-Man, he was murdered by the Green Goblin after deciding that the two should be proud of Peter Parker, rather than seeking revenge against him for doing the right thing. At the end of Spider-Man 2, his madness dissipated and he died saving the city from his faulty fusion reactor.

It might be interesting to have Doctor Octopus as a mad scientist antihero. That would fit his Spider-Man 2 persona, in which he was willing to endanger millions in his pursuit of knowledge. And this could be a story engine for a monthly title, or a motivation for the villain in a Spider-Man story. It could even be both.

Venom may have his own monthly, but it’s still possible to have him as the villain again, especially in a crossover between his title and Amazing Spider-Man, or Superior Spider-Man for that matter. A similar structure could easily be done as a clash between Spider-Man and Doctor Octopus, the payoff to events in two different titles, as an altruistic Otto Octavius arguably goes too far.

There is a question of where to put Otto’s brain when Spidey’s mind is restored, although that’s something fairly easy to solve in a world of clones and robots. A slight problem is that a specific visual design has been associated with Doctor Octopus for so long, so Marvel may have to reconcile the character’s new direction with the form that readers have associated with him.

Or the Hand could just resurrect him again. Just like they did back in Amazing Spider-Man #428.