The Last Stand of Old Politicians 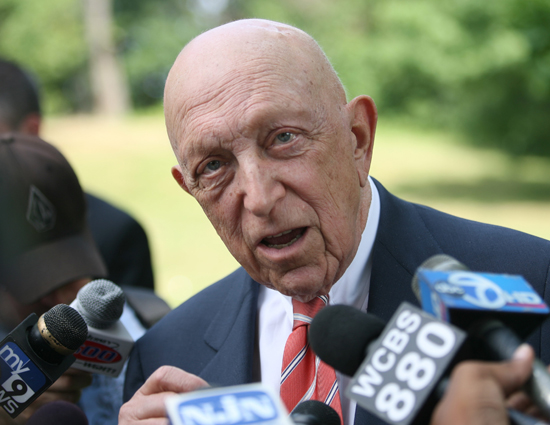 Newark Mayor Cory Booker has been criticized for his efforts to force out Frank Lautenberg. Lautenberg is the oldest member of the Senate. He actually retired in 2000, just before his 77th birthday. But he decided that he preferred to remain in the Senate, and returned in the 2002 election, when Robert Toricelli had to withdraw, following revelations that some of his campaign contributions were illegal. Lautenberg was reelected in 2008,
and has expressed an interest in seeking another term in 2014. If he wins that election, he would hope to finish his term weeks before his 97th birthday.

Lautenberg’s aides thought Booker was disrespectful. Lautenberg seemed to agree with the assessment, in his first public comments since the news broke.

Booker has already formed a 2014 campaign committee, prompting anonymous Lautenberg aides to rip the mayor to Politico, accusing him of being “disrespectful.” I asked Lautenberg about that characterization this afternoon.

“I have four children, I love each one of them. I can’t tell you that one of them wasn’t occasionally disrespectful, so I gave them a spanking and everything was OK,” Lautenberg said with a smile in his first public comments since Booker announced he was considering a run for Senate.

Looking at the polls, Lautenberg looks likely to join the group. The likeliest scenario is that he’ll announce that he will not seek another term in the Senate. And Booker will win the primary and general election decisively.

Lautenberg and his aides may complain about Booker’s disrespect, but the Newark mayor is doing the right thing for his party and his country. If Lautenberg was reelected, there would be the possibility that he would be unable to continue serving, which would allow Chris Christie (a heavy favorite, no pun intended, to win reelection) to appoint his successor. Pretending that there would be nothing wrong with electing a man in his nineties to the senate would be much worse. New Jersey is also an expensive media market, so anyone planning to run would need a head start, even a popular and media-savvy politician like Booker. By delaying the obvious decision, Lautenberg shows that he doesn’t deserve the respect that his aides demand.

There comes a time to retire gracefully. For Lautenberg, that was probably 2008. There’s nothing wrong with Cory Booker’s refusal to pretend otherwise.

I’m a comic book fan, wannabe writer, politics buff and New Yorker. I don’t actually follow baseball. In the Estonian language, “Mets” simply means forest, or lousy sports team. You can email me at mistermets@gmail.com
View all posts by Thomas Mets →
This entry was posted in Politics and tagged Chris Christie, Cory Booker, Frank Lautenberg, US Senate. Bookmark the permalink.