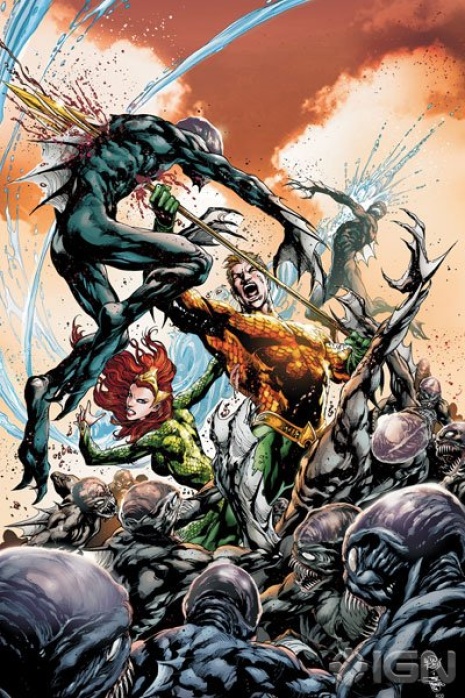 I decided to read at least 2013 comic book issues in 2013, a minimum of 500 of which will be Spider-Man related. I figured there would be progress reports once a month or so. The January list comes a few days late.

Aquaman #0, 6-14: Geoff Johns does great work on Aquaman, especially on the partnership with Mera. I don’t know if Black Manta was a compelling enough villain for such a long story, but the new superhero team is fully realized. I also loved the first meeting with Arthur’s brother.

Fantastic Four #334-336: The first arc of Walt Simonson’s run on the title. It’s a bit fun to see the F4 effortlessly dispatch various foes. The conversations about the Superhuman registration act are a precursor to Civil War, but it’s just not terribly interesting to see a congressional hearing in comic book form.

Thunderbolts (Marvel Now) #2-3: Too padded. The interactions between team members are successful, but the enemy isn’t all that compelling, and characters often stand around doing nothing.

Captain America (Volume 6) #1-5: It doesn’t justify the relaunch, especially considering how soon it would be until Brubaker leaves the title, and it gets relaunched again as part of Marvel Now! But it’s a solid Brubaker tale with gorgeous art by McNiven, as Cap faces an unusual but well-realized menace from his past. Giusepe Ciamancoli fills in for half the last issue, but he’s not a good fit with McNiven. 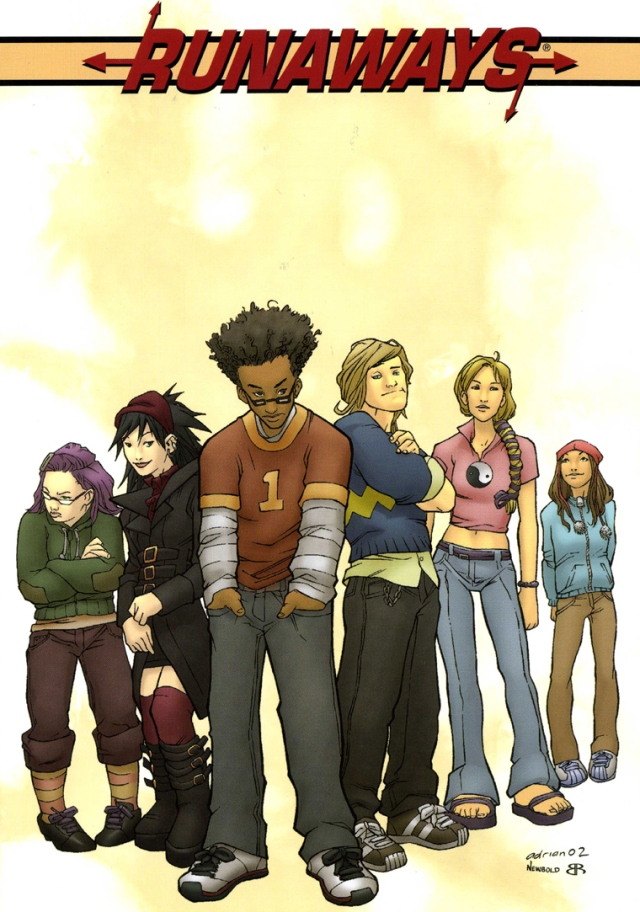 Runaways #1-18/ Runaways Volume 2 #1-24: Fun stuff. The teen heroes may be the best new Marvel characters since Wolverine, although I would have liked to see a better conclusion. It seemed to be lacking an epic finale.

Lone Wolf and Cub Volumes 1-9: I’ll count each tale as one comic, as most are 60 pages and the shortest are still longer than the average issue of a comic book published today. So this counts as 49 comics. Fantastic mostly standalone stuff, although there is a larger mythology. The book is very violent. Holy shit, is it violent.

Brightest Day #0-16: I was a bit surprised at how much this sets up the Aquaman monthly. It’s a solid epic following multiple DC heroes in the style of the 52 maxi-series. Aquaman and Martian Manhunter’s stories are more compelling than Hawkman, Firestorm and Deadman’s.

Uncanny Skill Kickers #1-5: I’m not a big Dungeons & Dragons fan (Seeing the movie killed all interest in the game) so some of the references may be lost on me. It’s a fun, although disposable, fantasy romp.

Sixth Gun #1-6: This one’s better. Good first arc to a western/ horror hybrid, with entertaining villains, and a solid central mystery with the gunslinger’s dark past.

And now for the Spider-Man comics. 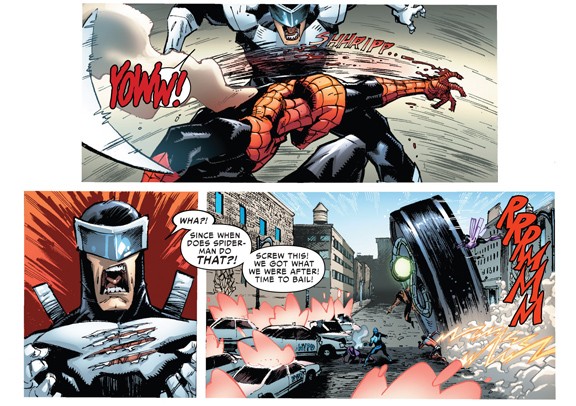 Amazing Spider-Man 698-700: Well told story with Peter Parker pushed to the absolute limit. Some of the Slott-isms were annoying, and Ramos’s art was sometimes grotesque. I’m not sure if in an year from now, I’ll think it’s one of the all-time great Spider-Man stories or one of many that’s just pretty good.

Amazing Spider-Man #699.1:  Solid character piece on Morbius/ pilot for his monthly, which expands on plot threads from ASM 101 and 699. Pretty effective at showing what his life was like before the transformation.

Avenging Spider-Man #15.1: Essentially a character study of Doc Ock in the aftermath of a great victory. Excellent epilogue.

Superior Spider-Man #1: Excellent self-contained intro to the new Spidey. The new Sinister Six is is ably introduced and dispatched, while Slott also shows us the new Spidey’s relationships with Horizon Labs and Mary Jane. And then there’s the cliffhanger, as the new status quo becomes clear.

Spectacular Spider-Man #173: Solid return of Doctor Octopus with a poignant moment between him and Aunt May. Conway and Buscema also had fun with the Daily Bugle’s pro Spider-Man stance.

Spectacular Spider-Man #174: Not a good follow-up. Just a generic battle between Spider-Man and Doc Ock, although the stakes were raised with Mary Jane in danger.

Spider-Man & The Human Torch in !Bahia De Los Muertos!: Had it reached the potential of Beland’s earlier Spider-Man work, he might be a star writer, or at least working on fill-in issues and spinoff titles. But it’s an okay team-up with some good emotional beats, but a rather uninspiring enemy.

Spider-Man Unlimited (2004) #1: Robert Kirkman and Cory Walker’s story builds to a twist when the follow-up is more interesting. But it’s fun to see some Erik Larsen creations pop up again. The other story is better, looking at a civilian changed by an encounter with Spider-Man and a sympathetic villain.

Peter Parker the Spectacular Spider-Man #24: The infamous debut of the Hypno Hustler. Actually a satisfying standalone comic set in the aftermath of Peter’s failure to graduate high school. The main problem is that Hypno Hustler is taken too seriously. But I do like Peter’s efforts to keep his identity secret.

Spider-Man #38-40: Underrated Electro story by J.M. Dematteis and Klaus Janson. Well worth tracking down in back issue bins. It’s a shame it hasn’t been reprinted. Great at showing how the lives of Spider-Man, Electro, J. Jonah Jameson and two new characters intersect.

Moribus (Marvel Now!)#1: I liked the pilot in ASM, but that was enough set-up. This is excessive. I like Morbius’s decision to move to a new location, but more payoff is necessary.

Amazing Spider-Man Annual #18: Some good Jonah moments, as he owns up to his responsibilities with the creation of the Scorpion. But it sometimes comes across as a retread. And the writing is often too on the nose.

Amazing Spider-Man #330-331: Some fun moments with the Punisher. Vibrant Larsen art, although I don’t really care for the storytelling. Some of the decisions the characters make are dubious.

Amazing Spider-Man #332-333: Not as much fun as Venom’s previous appearances, or even his next two appearances. He shares too much space with the less interesting Styx and Stone, which brings his appearance to a far too quick resolution.

Marvel Team Up #117: Odd curiosity. A J.M. Dematteis penned Spider-Man/ Wolverine team-up with art by the guy who illustrated Incredible Hulk #181. Marvel’s two best superheroes are kept apart too much, and the villain isn’t that compelling.

Marvel Team Up #128: Spider-Man’s first encounter with Vermin. A solid Captain America team-up with some tacked on moments of Peter Parker and Steve Rogers getting tempted to cheat on their girlfriends.

Venom #30: Didn’t care as much for this. They took long to tell us what we know from the start (Venom went berserk and kicked the asses of the U-Foes.)

Untold Tales of Spider-Man #-1: Fun stories set before Peter was Spider-Man. The tale of Peter’s parents is a victory lap for John Romita Sr.

A collection of five mostly self-contained stories about the feudal era assassin, as writer Kazuo Koike, and artist Goseki Kojima hit their stride. The story in which Ogami gets himself arrested is probably my favorite, although the assignment to assassinate a living buddha is quite memorable.