The latest issue of World’s Finest is an example of why comic books are so impenetrable to outsiders. The story follows the daughter of Batman and Catwoman from an alternate universe introduced in Earth Two (the book best known for featuring a gay Green Lantern) mourning Damian Wayne, the son of Batman and Talia Al Ghul from the regular Batman comics, of which there are currently five (Batman, Detective Comics, Batman and Robin, Batman: The Dark Knight, Batman Inc.) That number does not include spinoffs featuring characters from the Batman comics (Nightwing, Batgirl, Batwoman, Batwing, Catwoman), or team books in which Batman, or another character from the franchise, is a member, such as Justice League, Red Hood and the Outlaws, Teen Titans, Birds of Prey and Suicide Squad).

Damian Wayne was introduced a few years ago in Grant Morrison’s Batman. So understanding Huntress’s response to his death requires knowledge about several titles and several fictional universes, as well as a larger storyline Morrison started in 2003, itself the sequel to the 1987 Batman graphic novel Son of the Demon.

Someone just picking up a random issue at a comic book store will be missing a lot of the context. If you’re intrigued by an episode of a TV show, but confused by all the new characters with years of backstory, it will usually be easy to find all the earlier episodes and catch up. But a comic can be as impenetrable with references to events in earlier issues of other titles. Ideally, it would be possible to understand everything without having read all the material. But that assumes storytelling skills which some writers just don’t have. And sometimes there’s simply too much to explain.

If someone’s interested in the comic book medium, or a top franchise, they should be selective about where they start. Some work is much more likely to be inaccessible, so it’s better to start with something simpler..

One problem with explaining comics to outsiders is that there are so many types, just as a DVD section in a store could include films, film series, television shows and mini-series. So let’s look at the types of comics in the same way.

The most accessible titles are entirely self-contained. This is what people usually think of with the term Graphic Novel. The entire story is told in the course of one book. Examples include Watchmen, Stuck Rubber Baby and Maus, Art Spiegelman’s cartoon recounting of his father’s experiences in the Holocaust. 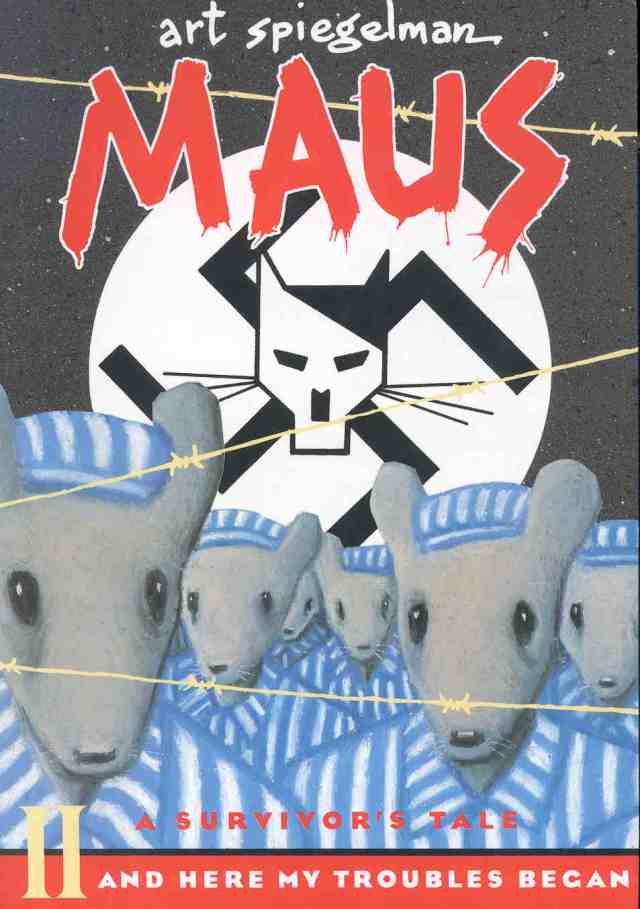 In this case, you just buy the book, and that’s it. For the most part. Even Maus requires some advice. The series was originally serialized in Raw, an anthology series published in 1980-1991. It was collected in two softcover volumes published five years apart, which were subsequently reprinted in one hardcover volume, which is probably the best way to get the series. There’s no sequel per se, but Spiegelman later released Metamaus, which includes supplemental material and his response to the unusual circumstances under which he became so famous. For a potential customer, knowing where Maus first appeared is as unimportant as knowing which magazine Lovecraft stories first appeared in. But someone who heard good things about the story might still pick up Volume 2 or Metamaus by mistake.

There are a few self-contained works set within a superhero universe. These may feature characters who have appeared in thousands of adventures elsewhere, but those adventures are not necessary to understand what happens in this particular story any more than someone needs to have read every short story from The Memoirs of Sherlock Holmes to understand the events in The Hound of the Baskervilles. For the most part, this type of question is exclusive to superhero comics, although licensed projects such as Dark Horse’s Star Wars line can also include a lot of material about the same characters, with the risk that some comics become impenetrable to new readers.

Sometimes, you have a writer/ artist who worked on the same character several times, but you don’t need to be familiar with one story to understand another. Frank Miller wrote the two best regarded Batman stories Year One and The Dark Knight Returns, and both can be enjoyed independently of one another. The same is true of Grant Morrison’s first two Batman stories: Arkham Asylum, a 1989 graphic novel, and Gothic, originally a five-part storyline in the anthology title Legends of the Dark Knight. You can pick up any Carl Barks Donald Duck/ Uncle Scrooge comic, without worrying about oblique references to the many other Barks stories.

As I’ve noted elsewhere, DC does publish accessible self-contained projects with their characters more often than Marvel. But there are still standalone stories with most of the Marvel icons. One further complication is that Marvel and DC sometimes publish stories with top characters, set outside the regular fictional universes. Startling Stories: Banner is a story about the Hulk, but not the Hulk of the Marvel Universe. It has a complete beginning, middle and end, as well as twists that aren’t meant to work with the history established by Stan Lee, Jack Kirby and Steve Ditko.

There are also a few standalone anthologies, the equivalent of short story collections. Sometimes, the material would be connected by a theme and sometimes it isn’t. But there isn’t a need to read any other comics to understand what’s going on in an EC Comics reprint, or Will Eisner’s Building Stories.

The self-contained series is slightly more complicated. These are also rather accessible. The entire story is told in the course of several volumes. Examples include Preacher, Y The Last Man, Locke and Key, Cerebus and Powers. In most cases, it’s preferable that you start with the first book.

Some of these books are still ongoing. The Walking Dead is still kicking after 100+ issues. So, readers catching up on the series in trade paperback form may have a decision to make about what to do when they’ve reached the most recent volume, and realize that getting the latest issues faster requires a change in the format, to either singles or digital downloads.

Some of these titles have been so successful that there are spinoffs. Hellboy begat BRPD, as well as mini-series about members of that team. Fables led to Jack of Fables, and Fairest. One difference between these, and the regular superhero universes is that the creator usually maintains complete control. 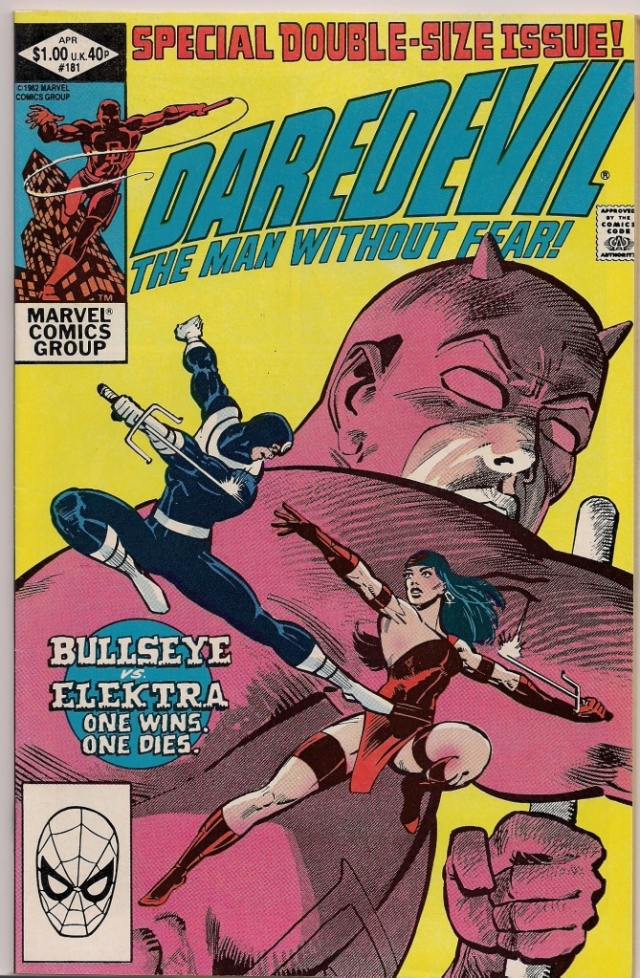 There are also a few self-contained series set within an existing universe, be it Marvel, DC or Star Wars. Sometimes these are runs on existing titles. Examples would include Frank Miller’s Daredevil, Alan Moore’s Saga of the Swamp Thing, Neil Gaiman’s Sandman and Grant Morrison’s New X-Men. These will often feature appearances of characters from other titles, although it should be easy to ignore those books completely. It’s sort of the comic book equivalent of a guest star in television, except the actor spends his entire life on one role.

In the old days, there was just the back issue market. Then, popular series were collected in trade paperbacks, which was just as well since early issue of popular series were often quite expensive. But now digital comics programs like comixology make it easy for fans to get reprints of individual issues of series. With greater choices comes greater confusion. Many of these titles didn’t necessarily began at Issue 1. This didn’t matter when the easiest way to read a comic was through Trade Paperbacks, but it could be a problem when navigating comixology.

Because of the nature of serial storytelling, work rarely begins with the creative teams having a fully realized plan for their series. There is a bit of a learning curve, and the earlier work can sometimes be less accessible than later volumes. Frank Miller is generally agreed to be one of the five best comic book writers ever, but he started his work on Daredevil as an artist. So the first nine issues of his run are written by Roger McKenzie, featuring storylines that started before Miller came to the title. These are often reprinted along with Miller’s more better-known work as the writer of the series. But when he was a writer, he featured references and follow-ups to events and characters in McKenzie’s run.

Neil Gaiman’s Sandman is mostly devoted to new characters, or to existing characters who fit the series so well you think Gaiman created them. However, the first seven issues feature significant appearances by characters like John Constantine, and Justice League villain Doctor Destiny. Cerebus started as a parody of Conan the Barbarian, and some of those early issues don’t hold up particularly well. But it’s worth reading to understand the relationships between the characters in the good stories.

One slight problem with notable runs is that these have been collected in numerous formats. The Lee/ Ditko Amazing Spider-Man can be accessed on comixology. It’s also reprinted in two black and white 500 page collections, or a series of four color collections (in both trade paperback and hardcover) as well as a thousand page Omnibus collection with a cover price of one hundred dollars. You’re going to have good comics no matter where you start, but you may want to spend some time learning about the potential formats, lest you change your mind later, and end up paying for the same material twice.

These have been the simpler types of comic books. It’s the place where someone interested in the medium, or a genre can start. Things are going to get more complicated very quickly, when we get to crossovers, relaunches and multiple universes.