One risk of paying so much attention to three-act structure is that it can become a distraction to notice in action when I’m watching a great movie like Strangers on a Train.

The inciting incident is when Bruno and Guy bump into each other on a train. Within six and a half minutes (including a credits sequence) we learn that Bruno has problems with his father, and that Guy has problems with his estranged wife. About eight minutes into the film, Bruno talks about how he would life would be better if they could just kill the people who are standing in their way. Nine and a half minutes into the film, he proposes the swap: He’ll kill Guy’s wife, and Guy will kill his dad. The men with the motive to commit the murder will have perfect alibis.

Bruno’s insanity allows the writers to skip a lot of the set-up. It would otherwise be unusual to have two strangers decide to commit a double murder together. Thinking back at the film, making the antagonist so unbalanced also allows the writers to come up with complications for Guy with Bruno starts making all sorts of mistakes, and acting in a way that people who don’t murder strangers usually don’t act.

27 minutes into the film, Bruno kills Guy’s wife Miriam at a county fair. We’ll see the location again at the end of the film. This seems to mark the end of the first Act. It’s the crossing of the threshold. Bruno is now a murderer, and Guy’s biggest problem is no longer what his wife has to say. 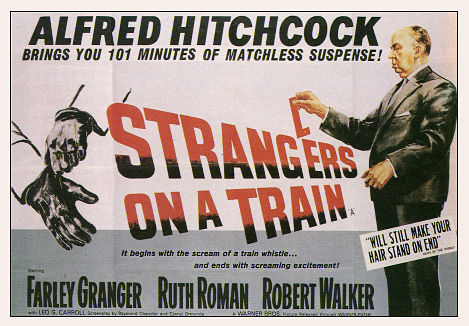 This sets up Act 2, as Guy is on a train to Washington to visit his girlfriend. He’s talking with another stranger, a drunk professor who will be unable to serve as an alibi later. This shows a shortcoming of Bruno’s plan, as Guy becomes a suspect when he’s able to prove that he wasn’t at the county fair.

Bruno soon comes to Guy wanting him to fulfill his half of the bargain. And this will serve as the crux for Act 2, as Guy tries to figure out a way out of the problem. Guy’s girl becomes suspicious of Bruno, a man who seems to have a strange effect on her husband, and accidentally chokes a nice old lady at a charity function.

After a few incidents, Guy agrees to kill Bruno’s father. He visits the belly of the beast, the home of the villain. He tries to warn the old man, but discovers Bruno is the only one in the house. Bruno is now aware that Guy has no interest whatsoever in fulfilling the bargain, and is feeling vengeful. There’s still a good chunk of the film left, but I would classify this as the Act Two climax. All appears lost.

Eventually it’s determined that Bruno will return to the scene of the murder in order to frame Guy. But fortunately he’ll do it late enough in the day that Guy can stop him, and still play a high profile tennis game. That allows for two main set pieces in the final act. Guy has his tennis game, and then tries to elude the police. He returns to the scene of the crime, and confronts Bruno.

For many writers, the biggest problem with a narrative is in the second act, as it’s difficult to keep the narrative interesting between the turning points in the act one climax and the act two climax. Whitfield Cook, Czenzi Ormonde and Raymond Chandler avoided that by making the third act bigger, with two climactic sequences, forcing the hero to overcome multiple challenges in order to clear his name.