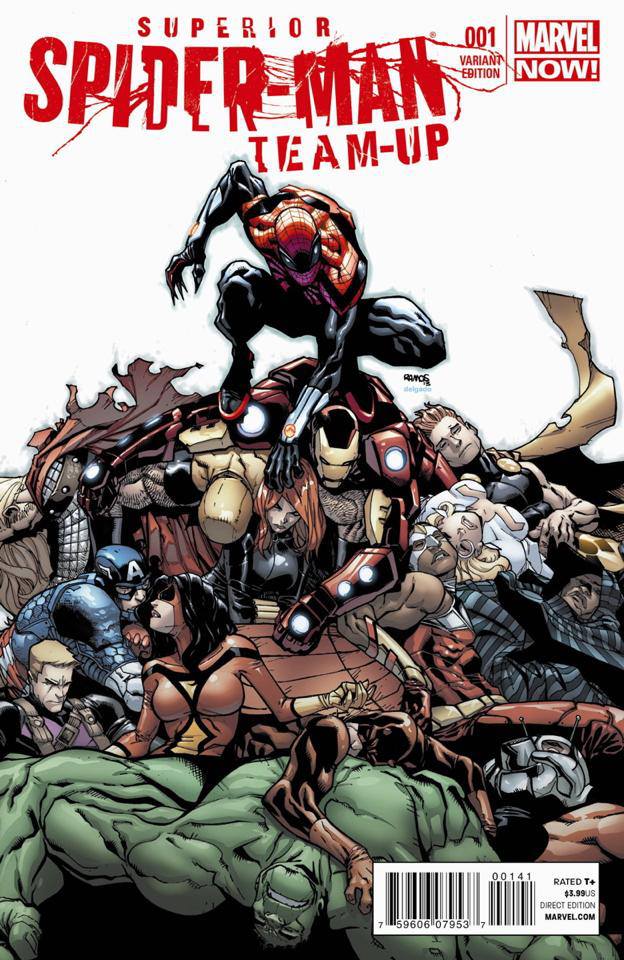 Earlier, I listed possible Spider-Man monthly titles that I had come up with in 2006. Seven years later, the list would be slightly different.

While I do prefer alternative schedules with an increased production of the main title, there is an advantage to having multiple Spider-Man books. Marvel’s stuck with four imperfect options. They could cut Spider-Man down to one book a month (Boo!) They could have one writer (or a writing duo) working on several issues a month. They could have a rotating group of writers, but this bothers people who prefer reading a series with a consistent voice.

Multiple monthlies is usually one way to get the appearance of one voice, even if it isn’t the reality, since the same character will still pop up in several different titles set at the same time.

In an interview with the AV Club, Alex Alonso discussed his efforts to get interesting creative teams for the Spider-Man comics in 2001.

Without a doubt. I know when I was hired by Bill to come to Marvel that he wanted me to take risks, he wanted his editors to take risks, and use their Rolodexes. Joe [J. Michael] Straczynski happened to be writing a book called Rising Stars at Image [Comics], which was my favorite superhero comic book at the time. He was someone I was very attracted to, but I didn’t know if he had a sense of humor. Rising Stars was many things, but it wasn’t funny. So I just gambled, but I thought Joe Straczynski would be a really good fit for Spider-Man, and when I was offered to take over the Spider-Man line I decided to keep Paul Jenkins on at Peter Parker: Spider-Man because he was telling young adult-friendly Spider-Man stories. It didn’t wander into quite the dark terrain that I knew Joe would go, the more mythological terrain, and then I started that anthology book Tangled Web, to turn loose my Vertigo anthology collaborators and new guys on Spider-Man stories.

He explained that he wanted the books to have different audiences.

With Spider-Man, the challenges were finding ways to push the boundaries without alienating the core fan base, or finding a way through the books to make sure that there was a read for everyone. I always hoped that Amazing Spider-Man would draw one audience, Peter Parker would draw another, and Tangled Web would be for the most adventurous readers of all, people who may not give a shit about Spider-Man, but might be attracted to reading a story by the creator, whether it was Paul Pope or Eduardo Risso or Garth Ennis, people you wouldn’t associate with Spider-Man, coming in and doing a story that took place in this world. Spider-Man is more a shadow on the wall than an actual character; he’s rarely if ever the lead guy in his own book. Turning guys like Paul Pope and Darwyn Cooke loose on Spider-Man was a real pleasure.

I don’t know how realistic a goal that is. Major developments do happen in Amazing Spider-Man, so that does become a book readers of other Spidey titles check out just to understand changes in the series they like. Why does Peter Parker have a new job? What happened to Mary Jane? Why did they move in with Aunt May? 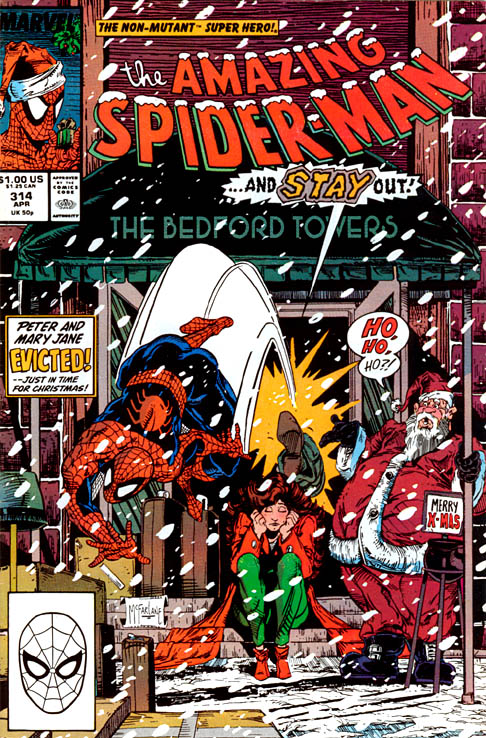 But, there may be ways to make it work. The best set-up for multiple monthlies is probably Amazing Spider-Man, Spider-Man and a team-up title.

There are a few later entries regarding the Superior Spider-Man status quo, but one reason I haven’t talked about what happened in ASM 700 as much as I have about One More Day is that I’m reasonably certain it’s temporary. I have no problem with shaking up the series for a little while, but Peter Parker will be back, along with Amazing Spider-Man.

When Marvel asked readers what their favorite comic books were, Amazing Spider-Man issues got 17 of the top 100 votes, thanks to the first appearances of Morbius, Punisher, the Black Cat, Mysterio, Vulture, Kingpin, Lizard, Doctor Octopus, Green Goblin,  in addition to the Master Planner saga, the first issue, and the deaths of the Stacys. That’s a lot of history. The book has also been a consistent seller, so it would be foolish not to take advantage of that. Plus, it’s now the name of the film series.

Marvel has often tried publishing more issues of Amazing Spider-Man than any other title, and that’s probably a good move. The 90s schedule of 15 issues an year (with the book coming out twice a month during the summer) could work, as a way to get slightly more money than the old format of 12 issues an year. During J Michael Straczysnki’s run, the book was often published for about 18 issues an year. They could also just maintain the twice-monthly schedule with my three title system.

Call it Marvel Team Up, Avenging Spider-Man, Spider-Man Team-Up, Spider-Man Versus or whatever sells. It’s a book with unique appeal to people who aren’t currently reading Spider-Man. And readers wouldn’t expect major changes in Peter Parker’s life, since this isn’t the title where you would find six-page conversations between Peter and his boss. Getting a new artist for every story—as seen in Bendis’s Ultimate Marvel Team Up—could be effective, providing readers with a new reason to pick up the series, and getting critical acclaim for a monthly that might otherwise be ignored in the conversation about interesting comic books. 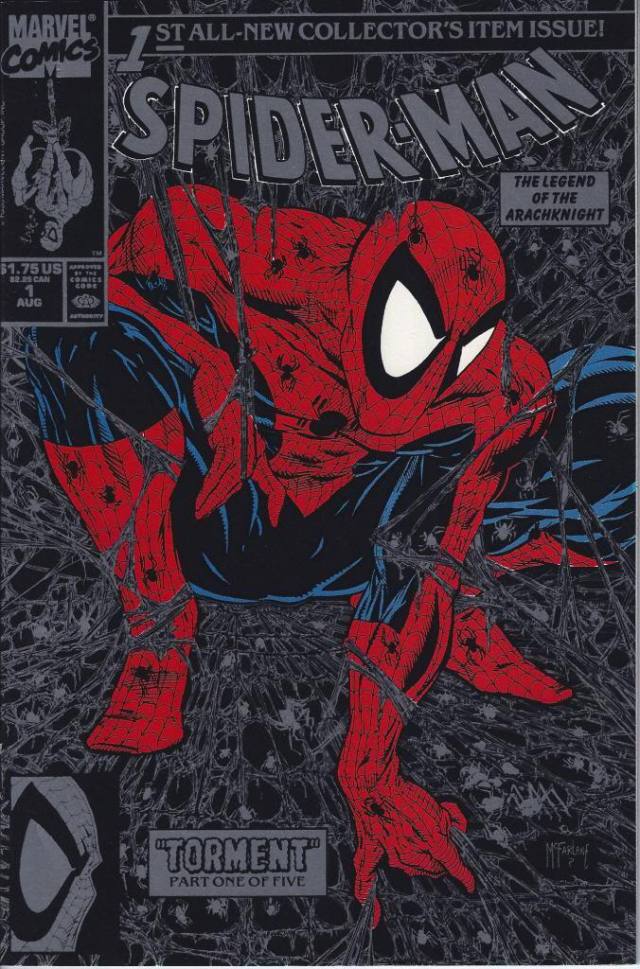 The third title would just be Spider-Man. I’m picking this name over Spectacular Spider-Man, Web of Spider-Man or anything else, just because it sells better. It’s also a way to honor the highest-selling Spider-Man comic of all time.

The ideal system would be if each creative team to work on the book would have some kind of hook, something that gives this series a unique identity. But when new creative teams come on board, they may go in a different directions, working with the guys in charge of Amazing Spider-Man to figure out what should happen in the side title to offer something unique from the main book. So if Amazing Spider-Man features mostly new villains as in JMS’s run, Spider-Man could be the book where Spidey fights his greatest foes, and we get to see what makes them tick. And the next creative team might make it the book for readers who want a complete story in every issue. And the next guys may make it more of a crime noir. The next guy may make it an ensemble title, focusing more on the supporting cast, as Gerry Conway’s did with 1980s Web of Spider-Man/ Spectacular Spider-Man work. And after twelve issues of that, it could become a book about Peter Parker’s significant other.

Getting an impressive creative team would do wonders for the sales of a satellite title. But there’s still the problem that they would probably get better sales on Amazing Spider-Man. However, there are advantages to offering readers more entry points into Marvel’s top hero.

If there’s room for one more book, Marvel might consider an anthology title, although that’s fraught with its own pitfalls.