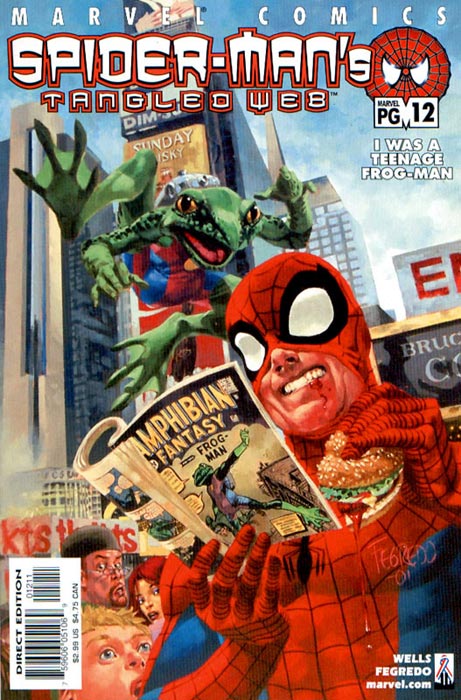 In the past, Marvel has made several efforts at a Spider-Man anthology series. And it seems they’ll take another go at it with the weekly Peter Parker Spider-Man mini-series, shipping in October with new stories by Rambo creator David Morrell, Klaus Janson and Joe Casey.

The first major attempt at an obvious Spider-Man anthology was the series Webspinners: Tales of Spider-Man. In the 1998 Wizard Spider-Man special, Marvel higher-ups discussed the decision to replace Spectacular Spider-Man.

“The idea is to have another Spider-Man book that’s different,” explains Ralph Macchio, senior editor of the Spider-Man books. “What I want to do is to talk to creators about periods of time that they’re intrigued by—a story we could expand on or an incident no one knew about—and do a several issue arc based on that.

“They didn’t know what to do with Spectacular,” says Dematteis. “They had some ideas. They said ‘Well, maybe we can do stories set in the 1970s when Peter was single and in college.’ I suggested that the one way to make it work was to have Spider-Man’s entire history to play with, to go back to any time period you wanted and, like Legends of the Dark Knight, see if you could get artists that would normally never do Spider-Man.

Exploring periods in the history of the character became the basis for the series. Dematteis’s first arc was set between the Lee/ Ditko run and the Lee/ Romita run, and the first issue included a back-up story about Peter and Gwen’s last date. Later arcs featured Peter Parker’s prom, and an early encounter with Silver Surfer. Tom Defalco and Ron Frenz ended the book with a story set in the tail end of their run on Amazing Spider-Man, with a rematch between Spider-Man and the Sinister Syndicate. 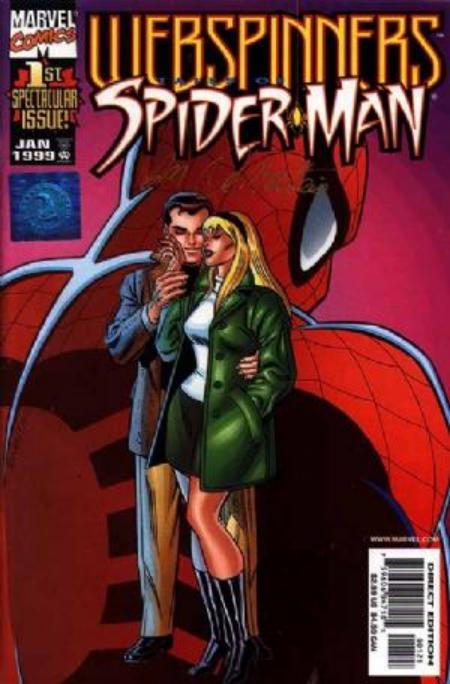 The book was usually the best Spider-Man comic of the month (although the competition was Chapter One and the Mackie relaunch.) Macchio’s goals were ambitious.

“I really want this book to shine,” says Macchio. “I want people to have a reason to pick it up that goes beyond the fact that it’s Spider-Man, This isn’t a book where I want to use people of just average talent, even if they’re decent—this isn’t a tryout book. I really want creators whose name alone is going to make people sit up and take notice. And as long as we keep to the continuity and characterization that’s established, I think we can tell some very different and very bizarre stories.

Unfortunately, sales kind of sucked. So some stories that were mentioned in the Wizard article as potential future arcs were later released as mini-series. Lee Weeks’s exploration of the Death of Captain Stacy became the three-part Death & Destiny. Steve Rude’s Tablet of Time sequel was released as Lifeline.

Within an year of the cancellation of Webspinners, Marvel had a new hook for Tangled Web. This focused on the people within the Marvel Universe affected by Spider-Man, from ordinary civilians to supervillains like the Rhino and the Spot. Editor Alex Alonso sought out cooler top-tier talent like Darwyn Cooke and Garth Ennis, reuniting with Hitman artist John McCrea. Sales were still pretty low.

In both cases, the creative teams were usually impressive. The material was accessible to new readers. And there was a consistent hook for the continuing series.

And they still tried again. Spider-Man Unlimited, which has two complete stories in every issue, lasted for about twelve issues. Web of Spider-Man lasted for the same amount of time, although it seemed to include material that there wasn’t room for in Amazing Spider-Man.

Readers have reasons to be wary. The material can be wildly inconsistent, and sometimes you’ll just have a creative team that flops. There’s more consistency with one solid creative team, and you’re more likely to plow through a bad arc if the ongoing subplots are interesting. There’s much less of interest in a bad story that is entirely self-contained.

The appeal of a Spider-Man anthology title for Marvel is obvious. It’s relatively easy to commission these stories from new creative teams, since it doesn’t require as serious a commitment from the writers and artists. It provides work to anyone who has a hole in their schedule, or wants a change of pace between two longer projects. In some cases, these arcs can be used as an audition for future Marvel work—even if Macchio argued otherwise—as when Paul Jenkins was given Peter Parker Spider-Man after an impressive Webspinners three-parter, and Dan Slott was made a member of the Brain Trust after Spider-Man/ Human Torch.

These are evergreen products. The longer stories can be sold as trade paperbacks that could make Marvel money for years to come. A five part storyline by Grant Morrison and Klaus Janson in Legends of the Dark Knight remains an accessible trade paperback for new Batman readers looking for something that isn’t continuity heavy. Shorter stories can also be used to pad out material elsewhere. An obscure two-part Spider-Man VS Vulture arc can be shoved into an otherwise four issue trade paperback dealing with Adrian Toomes.

But there are some differences between Batman and Spider-Man. The best Spider-Man stories tend to be parts of larger runs (about 19 of IGN’s Top 25.) The majority of the best Batman stories tend to be self-contained (compare IGN’s list for the dark knight), probably because issue to issue continuity has never been all that important.

It’s also worth nothing that self-contained Spider-Man stories usually refer quite specifically to other stories, to establish it in a particular time in the comics. Spider-Man/ Human Torch has specific references to comics from when those stories are set. Kraven’s Last Hunt has a newlywed Peter Parker weirded out by the death of Ned Leeds. The Commuter (a fill-in by a guy who was on another Spider-Man title at the time) references the alien costume saga, and Spidey’s s relationship with the Black Cat. Sensational Spider-Man Annual #1 is part of “Back in Black.” Webspinners tried to take advantage of that with material set in Peter Parker’s past, although that results in material that may be confusing for new readers (with a new status quo in every story) and that can just seem inconsequential, since it’s something that was never referenced.

Marvel did briefly have a successful anthology, even if that aspect of the title seemed to go under the radar. After Todd Mcfarlane’s departure, the monthly Spider-Man rarely had a consistent creative team. Instead the likes of Erik Larsen and Steven Grant came to the book, often to provide follow-ups to their earlier stories. This lasted until Howard Mackie was given control of the book over two years later. One advantage for the books was a relatively consistent status quo, which made it easier to plug the new adventures into events in the other titles.

It’s a difficult strategy for Marvel to emulate, requiring an year of work from an A-list creator who is subsequently followed by a similar creator with an absurdly commercial concept for a storyline—in Larsen’s case, it was Spider-Man and his superhero friends versus his greatest enemies. If Neil Gaiman and John Cassady launched a new Spider-Man title, the next few issues after their departure might sell pretty well. It’s also possible that what worked in the early 90s isn’t going to fit in the current market.

I’m a comic book fan, wannabe writer, politics buff and New Yorker. I don’t actually follow baseball. In the Estonian language, “Mets” simply means forest, or lousy sports team. You can email me at mistermets@gmail.com
View all posts by Thomas Mets →
This entry was posted in Spider-Man and tagged Batman, JM Dematteis, Spider-Man schedule, The Infinite Spider-Man. Bookmark the permalink.