Estonia In The Media

With Putin’s aggression in Ukraine, Estonia’s in the news. The Daily Beast had a profile on President Toomas Ilves‘s efforts to fight back against Putin.

So, where should the West focus its attention?

Ilves’ eyes light up and he repeats one word: “Banks,” he says. “Banks.” The American sanctions have targeted one financial institution so far, Bank Rossiya, described by the U.S. as “the personal bank for senior officials.” But such measures could go much further. After the 9/11 terrorist attacks, the United States developed a complex and stringent system for applying economic sanctions to target terrorist funding. Ilves would like to see the same sort of tools deployed against many of the banks doing business with the Russian government and Putin’s cronies.

Ilves also raises the idea of reviewing Europe’s recognition of Russian passports as “trustworthy travel documents.” A key element of Moscow’s game plan in the territories it wants to take is “passportization,” the cynical—not to mention illegal—distribution of Russian passports to citizens of other countries. That’s what it did in the Georgian territories of Abkhazia and South Ossetia in the run-up to the 2008 War. Earlier this month it did the same thing in Crimea. “If it were some other country that was a passport mill, there would be a reaction to that,” says Ilves.

The reason that there is a large Russian minority in the east of Estonia is that that region, essentially situated around the city of Narva, was ethnically cleansed by the invading Soviets at the end of the Second World War. The Estonians who lived there were either killed in the fighting, murdered, deported or driven into exile, something that Moscow seems curiously unwilling to acknowledge.

Overall, Estonia’s ethnic-Russian minority — today around a quarter of the population (down from around 30 percent at the end of the long Soviet occupation) — live far better, and enjoy much more in the way of political freedom than Russians across the border in Russia itself. Indeed, the younger generation (or so I was told during the course of a visit to the largely Russian-speaking town of Sillamäe 18 months ago) have something of an advantage over their Estonian peers. They have a better grasp of Estonian than young ethnic Estonians have of Russian (the language of the former occupier) giving them a useful leg up in the employment market of what is de facto, if not de jure, a bilingual country.

That ethnic Estonians insist that their small country retains Estonian as the sole official language is neither shocking nor surprising. This scrap of territory is the only land that Estonians have left to call their own — and that only just. The fate of three vanished or vanishing languages — Old Prussian, Livonian and Ingrian — in their own neighborhood serve as a constant reminder of what could lie ahead for their own tongue. 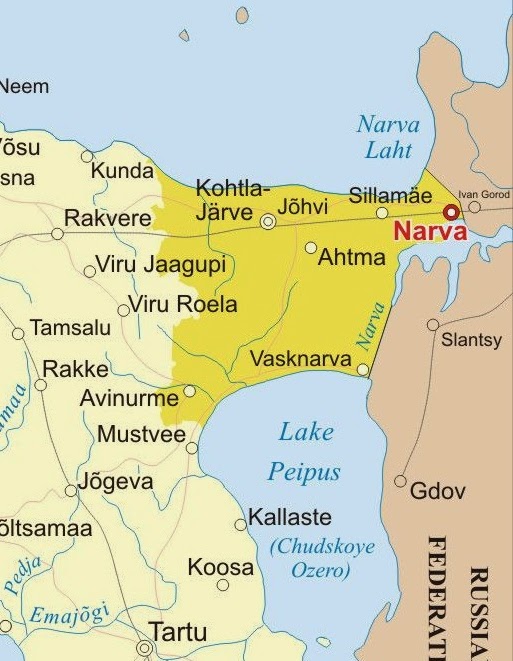 Daniel Berman argues that Narva is a likely target for Putin.

That corner may lie in the city of Narva. Nestled between Russian territory on three sides, the city has played a large role in Russian history. It was Russia’s first major port to the West in the 16th Century. It was here in 1701 that Peter the Great was decisively beaten by the Swedish King Charles XII in the opening battle of the Great Northern War, eventual victory in which would establish Russia as a leading European power. Finally, it was the site of a major Soviet victory in the Second World War.
If Narva shares the sort of historical links with Russia that inspired such a strong attachment in the Crimea, its demographic links with Moscow are even stronger. 94% of the population is Russian speaking, 82% of whom are ethnic Russians, compared with only 4% who are Estonian. That compares with a figure of only a little over 60% in Crimea. Even more worryingly, Narva is a major symbol of what is one of Estonia’s largest domestic problems, its effort to reduce the size of its Russian minority population through the mechanism of denying a substantial percentage of its residents citizenship. Despite lying within Estonian territory, only 47% of the population possesses Estonian Citizenship. Almost as many, 36%, hold Russian citizenship Finally, 16% are stateless. Having grown up in Estonia, they have no claim to citizenship in Russia or anywhere else, but Estonia has denied them citizenship. As a consequence they exist in a legal grey area, able to move to some degree within the EU, but unable to work or travel outside it except to Russia. Its hardly a surprise then that Narva has an unemployment rate north of 40%, and one of the highest HIV rates in Europe.
On examination there, Putin’s political position regarding Narva is far stronger than it was in the Crimea. Narva is more uniformly Russia in population, has more cause for discontent with Latvia than the Crimea had with Kiev, and his moral argument is genuinely strong. By contrast the West’s case is far less – there is no strategic or economic value in the city, the Estonian government’s treatment of the local population is indefensible, and the locals, especially those who are stateless, have much to gain from Russian support, not least citizenship somewhere, even if its within Putin’s Russian Federation.
In effect, if the West did feel Crimea is worth fighting for, fighting over Narva would be an act of madness. Or it would be an act of madness except for the minor issues deriving from Estonia’s membership in NATO and the EU, most prominently NATO’s Article Five requiring the United States and Europe to defend Estonia’s independence, presumably within its existing borders regardless of what it does within them.

In lighter news, the Guardian covered a development in an Estonian soccer match.

Saturday Morning Breakfast Cereal considered what would happen if we developed the ability to communicate with other universes. The President had an important question for her counterparts in those universes. 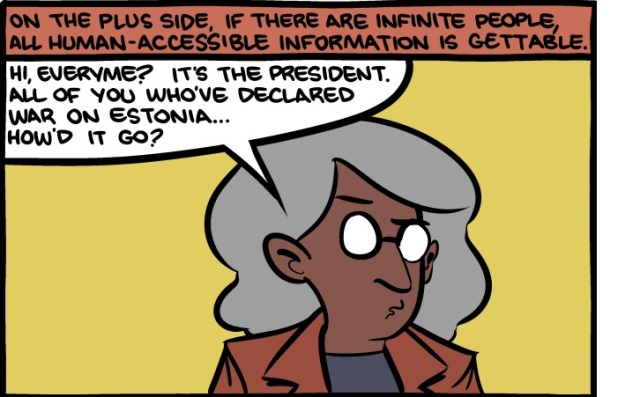 It isn’t the webcomic’s first reference to Estonia.

Ten million people have watched a Youtube video of  Sara “smoukahontas” imitating what Estonian sounds like to foreigners. Granted, the vast majority of them were probably interested in the other languages she imitated.