Does the next movie Spider-Man have to be white?

There is currently some speculation that the film Spider-Man shared by Sony and Marvel/ Disney is going to be depicted by an African-American actor.

One way this would happen is if they decide to introduce the Miles Morales Spider-Man, instead of having Peter Parker be Spider-Man. The best arguments I’ve seen for Miles is that there are too many MCU films with white guys as leads, and that it would be a break from the earlier films, but I don’t think that’s good enough. I like the Ultimate Spider-Man comics, but the source material is better for Peter Parker, and there’s simply a lot more of it.

Miles Morales also doesn’t have a story engine that makes sense in the first appearance of a Spider-Man to a cinematic universe. He’s a guy taking over the legacy of another hero, which doesn’t work in a Marvel Universe where Spider-Man hasn’t made an appearance yet. Things might be different after a few films with the Peter Parker Spider-Man, but that’s a different story.

The other possibility is that they won’t have a white Peter Parker. It is worth noting that there are two ways to get an African-American Peter Parker, each with its own arguments. One is to limit the role to young black men. The other is to allow young black men to audition, along with young white men. And young Hispanic men. And young Asian men.

There’s some pushback to the idea, with fans claiming that there’s no reason for the change, although that’s obviously incorrect. These would serve numerous purposes. It could allow for a good performance. It adds diversity to the MCU, and to the tops of the box office charts. It reflects demographic changes in New York City.

There are also arguments for limiting the role to young white male actors. One issue is that certain scenes might have negative connotations that wouldn’t exist with a white Peter Parker (IE- Is J Jonah Jameson being a racist by ripping him off? Why is Flash Thompson pissed that he’s talking to Liz Allen? Is his academic scholarship affirmative action?)

The main argument for Peter Parker to be played by a white guy is that some fans want to see the character in the film match the way the character in the comics looks. They’ll prize this kind of fidelity, as is evident in many discussions about potential casting, where relatively obscure actors and celebrities are often suggested for roles just because of physical similarities to the comic book character. It’s not a position I hold but I can understand it. I do think capturing the spirit of the character is more important than capturing the likeness.

Visually, the thing that matters the most is that he’s non-threatening. He’s a bit generic-looking (neither short nor tall, neither chubby nor fat, etc.) This works in two ways: It’s easier for readers to imagine themselves as him. And it means that the people around him will often underestimate him. This doesn’t require a white actor.

Some wonder where the line will be drawn. Why should casting be limited to young men with relatively low BMIs? If race isn’t important, why does age or physical fitness matter? There is a serious answer to this smartass question. Certain aspects of the character are necessary for particular narratives. Age is relevant, because the actor is supposed to match age-specific settings for the character in the film, be it High School, College or wherever he works. It matters that Peter Parker’s in shape, because if Spider-Man doesn’t look fit, the film will appear to have a different tone. Gender matters because it informs relationships with Peter’s contemporaries. It’s not clear that race is relevant.

The Sam Raimi Spider-Man films, and the Marc Webb Amazing Spider-Man series would not have been radically different if the lead were an awkward black guy instead of an awkward white guy. Sony might have gone with a different Uncle Ben (James Earl Jones rather than Cliff Robertson, Morgan Freeman rather than Martin Sheen) and the parents would have been played by different actors, but as Aunt May isn’t even a blood relative, they don’t have to change a thing there.

There are some questions about why it would be okay to have a black Peter Parker, but not a Shaft played by Bradley Cooper. There’s a serious answer to this one as well. Race is unambiguously relevant to the background of certain characters. Bruce Wayne is old money. Captain America was the face of America at a time of legal segregation. Black Panther is the king of a mysterious African nation. Shaft is a private detective in mostly urban settings. Black Widow is Russian.

There are more roles for white male actors than African-American, Hispanic and Asian actors, so expanding casting to possibly include minorities helps combat institutional problems, whereas the reverse isn’t true if a studio is thinking about Clive Owen as Robbie Robertson. When Donald Glover launched a campaign to be Spider-Man in the Marc Webb relaunch, Stan Lee was in favor of it, so the co-creator of the character doesn’t think Spider-Man has to be white. I do think Peter’s race is more of a bug than a feature. Stan Lee would probably not have been able to depict a young black lead in the 1960s. But this doesn’t make Peter’s race a defining part of his character. Peter’s religious and political views have rarely been relevant to the comics or any of the various adaptations, so it doesn’t seem like an important part of the character. It seems to be the same way with race. 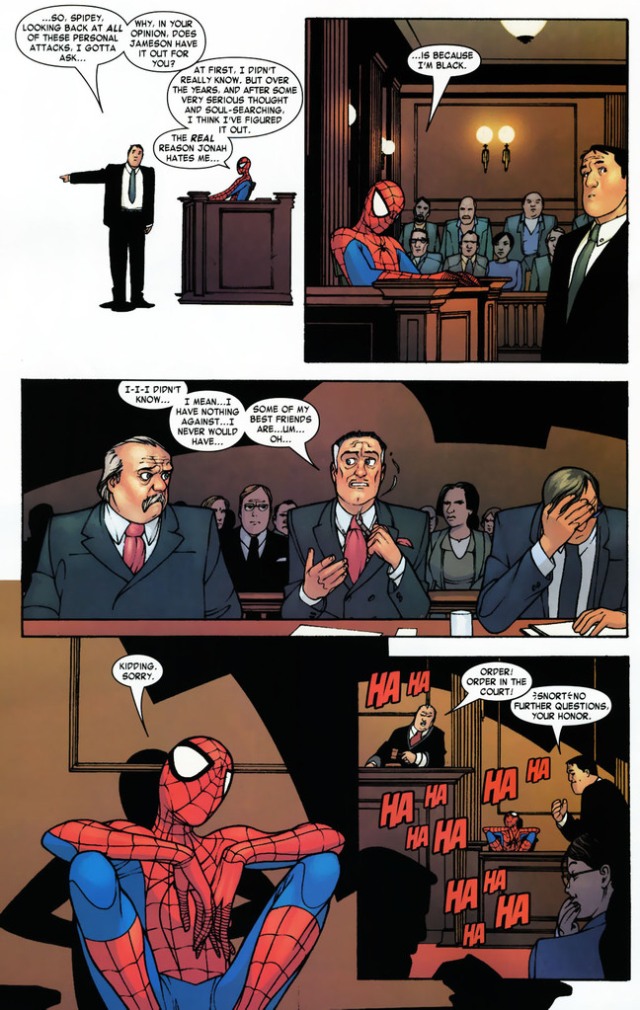 There are some concerns that Marvel would be unable to change this element of the character in future iterations. I don’t think there would be an expectation that all subsequent versions of Peter Parker be black. We’ve had two white guys playing Peter Parker across five films, so a new casting wouldn’t define the character for audiences the way John Stewart might have defined Green Lantern for fans of the Justice League animinated series.

There is some concern that a black Peter Parker might make it less likely that we’ll see Miles Morales in the films, but this seems to be putting the cart before the horse. It’s possible that the films won’t get to the point where the character is introduced, so I don’t know how much they should worry about that. And a young half-hispanic/ half-African American kid can be influenced by a black superhero just as much as a white superhero.

There is a counterpoint that we do generally make the assumption that whiteness is neutral even though it isn’t. So by that standard, a black Peter Parker would not be the same guy we have in the comics. On the other hand, people interested in more diverse casting suggest that it could allow for more meat to the story. My concern is that there may come a point where the meat results in a character that is fundamantally different. I get an argument that it can be an interesting way to highlight social problems, but it might also make it easier to dismiss the implications of events in a story (A suspicious security guard is just an example of the Parker luck, therefore this scene suggests that racism is exaggerated.)

There’s a final argument that we should just create new iconic characters with greater diversity, rather than allow changes in existing characters. Writers and artists don’t choose in advance which characters take off, and many of the older characters benefitted from filling needs generations ago when the old lead characters were always white and generally male. Spider-Man was a teenage hero who wasn’t a sidekick at a time that was unique, and that’s a major reason he’s popular 50+ years later. That’s not particularly fair.