This was something I wrote for a class on multiculturalism in Education. It was a response to a Vox Article: 3 reasons Common Core is especially controversial in New York. The main takeaway is that New York suffered from inconvenient timing, shifting to Common Core standards as the basis for tests before most other states did, but after Common Core had become a political issue. This was in contrast to Kentucky, which adopted common core standards even earlier. New York also implemented common core standards during a reform of the teacher evaluation system, and is under more scrutiny due to the media market.

Three facts author Libby Nelson mentioned in her article are…

I like the goal behind the website Vox, as a place to provide context and explanations for issues in the news, allowing readers to put new developments in context. There does tend to be a left-wing bias in some of the pieces, but it’s largely absent in an article comparing education policies in states with centrist Democratic Governors. I generally agree with the criticisms and explanations about what makes Common Core different in New York, although the analysis of the difference between states glosses over other complaints about the new standards, which is problematic for a website with the goal of providing explanations for people unfamiliar with an issue. The phrase “Common Core” is highlighted in the piece, and clicking on it gets to a piece providing more background information, including answers to questions like “How are national standards different from a national curriculum?” However, someone unfamiliar with vox.com might not know how to access that. 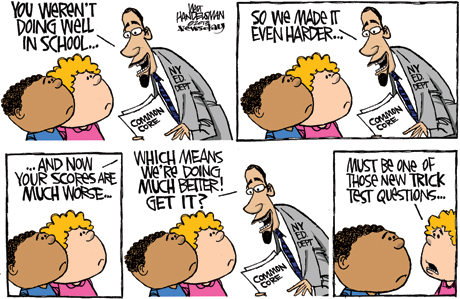 A clear implication for the classroom is that student test scores are a part of teacher evaluations in New York, where I would be likely to work. This is another situation where an individual teacher’s options are going to be limited, as the decision on whether to change these standards is up to others. Anyone who follows education is aware that common core is controversial, and has rather vocal critics, although the article provided a few more examples of that.

Note: New York has since changed the rules so that evaluations are no longer based on state tests, although internal evaluations based on criteria decided by the school in accordance to state standards may determine much of the grade.