The Conservative Reaction to Alexandria Ocasio-Cortez 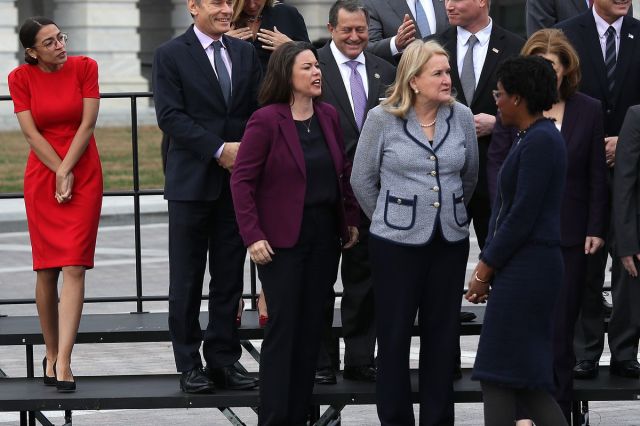 For much of the left, Alexandria Ocasio-Cortez is an exciting figure, and they can’t understand why anyone could be concerned about her sudden prominence. It shows a massive cognitive dissonance to realize that people on the center and the right aren’t going to like one of the most liberal members of Congress. It leads to dumb interpretations of the views of others.

Matthew Chapman of Salon compaed her to Paul Ryan, who was also elected to Congress at the age of 28.

There may not be one single reason why Ocasio-Cortez is not taken as seriously as Ryan. Possibly the media is just inherently more skeptical of ideas coming from left of center than from right of center. Possibly they are also more willing to listen to a white man than a woman of color.

The problem with this comparison was that Paul Ryan wasn’t a national figure upon getting elected to Congress. He became significant because he followed Barney Frank’s advice and picked topics to specialize in, so that within years he would be seen as a policy expert on those topics. It took him a while to be seen as more remarkable than any of the other members of congress elected in 1998. In contrast, Ocasio-Cortez became prominent the moment she won her nomination. It’s also entirely possible that she won’t be the most remarkable member of her congressional class, given all the Obama staffers who ran and won, and would come to Congress with a faster understanding of how Washington works. Conservatives like some new members of Congress, such as a Dan Crenshaw, the veteran who turned a bad joke at his expense on Saturday Night Live into a lesson on forgiveness.

She’s also made a few major gaffes. She didn’t know the three branches of government. She claimed the US spent 21 trillion dollars on accounting errors in the defense department between 1998 and 2015, when total defense since 1940 is under 18 trillion dollars (she misunderstood a study about how the Pentagon has exxagerated levels of spending.) She confused the defense spending in the military budget with the increase, and claimed a 700 billion dollar increase in defense spending for 2018. She falsely claimed unemployment was low because of people holding two jobs, when that wouldn’t affect the unemployment rate. She claimed Israel was occupying Palestine, and then admit she had no idea what the hell she was talking about.

There are many younger and newer members of Congress who will make significant errors, especially when they get to office for the first time. She’s under a lot of scrutiny because the media and national Democrats decided to highlight her, with the implication that others are less impressive and more prone to gaffes.

The main issue with Alexandra Ocasio-Cortez is that she has gotten a lot of positive media attention, and the DNC Chairman has said that she represents the future of the Democratic party. Vox had a piece about how she should be able to run for President. As a result, Republicans are eager to attack the implications of what it means that she is being treated as one of the Democratic party’s shining lights, and what it means that she has been embraced by the media and the establishment for people who aren’t excited by the political agenda of the Democratic Socialists of America. The equivalent might be the reaction of how Democrats would react if if an open member of a white nationalist forum won a Republican congressional primary in a safe-R district, and was immediately embraced by Fox News and the RNC.

There’s a bit of a feedback loop when some in the media start talking about some dumb argument against her, like when someone on twitter with a few thousand followers and a now-deleted account posted clips of her dancing in her Boston University days. This was used as an example of how conservatives reacted to her, when there weren’t many serious conservatives pushing the idea. The ensuing arguments about media bias just led to more conservatives talking about her.

I’m a comic book fan, wannabe writer, politics buff and New Yorker. I don’t actually follow baseball. In the Estonian language, “Mets” simply means forest, or lousy sports team. You can email me at mistermets@gmail.com
View all posts by Thomas Mets →
This entry was posted in Politics. Bookmark the permalink.