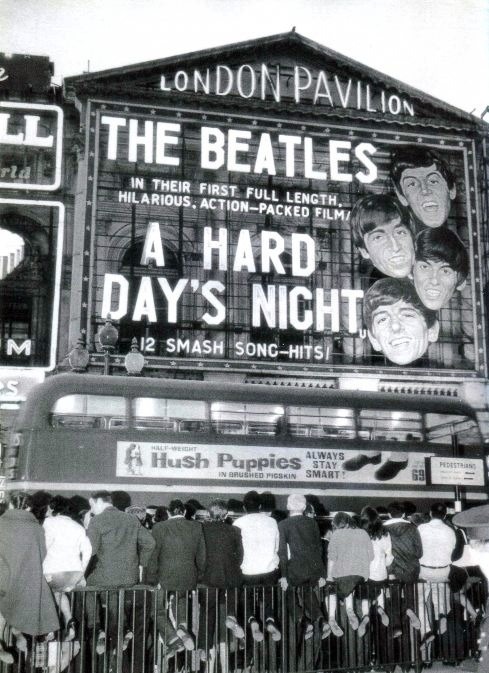 Movie #131/ 1960s Movie #14/ Criterion Edition #29/ BFI Top 100 #1: A Hard Day’s Night
This is an oddball hit for the world’s best band. It highlights their Britishness well. It’s a decent comedy, even if it’s a minor project in the context of their greatest work. But it is a lot of fun, and has some terrific songs and set pieces.
9/10

Movie #132/ New Movie #87/ 2019 Movie #11/ Seen In Theaters #11: Ready or Not
A comedy-horror piece about a woman who marries into a twisted family doesn’t really live up to the potential. There are some decent sequences, but it’s not as fun or incisive as it should be.
6/10

Movie #133/ New Movie #88/ 1970s Film #12/ Nation’s Best #1/ Dutch Film #: Turkish Delight
A Five Easy Pieces angry young man type collaboration between Paul Verhoeven and Rutger Hauer that established both their careers, and ranks as one the most beloved film in the Netherlands in at least one poll. The love story is affecting, and even if the male lead is messed up and self-destructive, it’s believably so.
9/10

Movie #134/ 2000s Movie #11/ Seen In Theaters #12: Kill Bill Volume 1
For some reason, Regal seemed to have a Quentin Tarantino retrospective allowing me to catch the Kill Bills and Pulp Fiction in theaters. It’s probably the first time I saw this on the big screen since it came out, which means it’s the first time I saw it in theaters knowing how well Tarantino would stick the landing. He makes a homage that is better than the films he enjoyed, with some of the most impressive fight scenes I’ve ever seen.
10/10

Movie #135/ 2000s Movie #12/ Seen In Theaters #13: Kill Bill Volume 2
The second half of the Kill Bill saga explores the Bride’s character, and features some tremendous twists in her bloody quest for revenge. It probably should ahve won Oscars in all the categories Mystic River dominated ever (Best Picture/ Best Director/ Best Actress/ Best Supporting Actor for David Carradine as the titular villain who lives up to an entire film’s worth of set-up.)
10/10

Movie #136/ New Movie #89/ 2010s Movie #11/ Finnish Film #3/ Criterion Edition #30: The Other Side of Hope
An interesting deadpan exploration of two different experiences: a Finnish middle-class businessman starting over, and a middle-Eastern refugee. Solid intro to Aki Kaurismäki, and his method of treating the ridiculousness seriously and vice versa.
9/10

Movie #138/ New Movie #90/ 1930s Movie #12/ Best Picture Winner #1: Cavalcade
An early Best Picture winner that has earned a reputation as one of the worst Best Picture winners. It’s just dull in its exploration of the early 20th century from the perspective of a wealthy British family.
6/10

Movie #140/ 2010s Movie #14: The Martian
An enjoyable sci-fi film that feels like it’s occurring now, and gives Matt Damon an opportunity to give an Oscarbait performance.
9/10

Movie #141/ New Movie #91/ 1940s Film #11/ BFI Top 100 #2: Kind Hearts and Coronets
Decent deadpan comedy of a nobleman wiping out a series of rivals in his way to a dukedom. Alec Guiness’ performance as the different rivals is astonishing, taking full advantage of his anonymity to the extent that he could pass for eight different actors playing the minor roles.
8/10

Movie #142/ New Movie #92/ 2019 Movie #12/ Seen In Theaters 15#: Ad Astra
For some stretches, this sci-fi exploration of a reserved middle-aged man with an astounding ability to compartmentalize is just dull. It’s decent world-building and some of the set pieces are pretty good, although it just seems that the point of a battle on a moon-base or chaos on a seemingly abandoned space-shuttle was to puncture moments of boredom. The film does consider the implications of a vision of the future we rarely see in movies; what if we discover that we are alone and there’s no one else out there?
7/10

Movie #144/ New Movie #93/ 2019 Movie #13/ Seen In Theaters #16: Joker
This film is interesting beyond the larger controversy. It is a story that borrows heavily from 1970s/ 1980s crime dramas, but does get to its own story of a pathetic man who finds success doing monstrous things. Joaquin Phoenix’s main performance is terrific, as he blends together multiple personas: the troubled Arthur, his fantasy version of himself and his own take on one of the great and comic book villains.
8/10

Movie #145/ 1980s Movie #11/ BFI Top 100 #4/ Criterion Edition/ Channel #31: Withnail and I
A different than usual take on the road trip as a struggling actor and his roommate travel from London to the British lakeside, facing misunderstandings and a perverted uncle. Richard Grant shines as the self-destructive Withnail.
9/10

Movie #146/ New Movie #94/ 1960s Film #15/ Nation’s Best #2/ Spanish Language Film #4/ Criterion Edition #32: Memories of Underdevelopment
Consistently rated one of the best Cuban films ever, it takes an unusual perspective at the revolution, through the eyes of a successful middle-aged man who generally wants no part in it. It seems surprisingly relevant in the current culture where middle-class people (especially men) are trying to make sense of new standards.
10/10

Movie #147/ 1970s Movie #13/ Best Picture Winner #2/ AFI Top 100 #3: Annie Hall
This take on a failed relationship still works on so many levels. It’s really witty, allowing Allen his best starring role, but also demonstrating some self-awareness in his many flaws. Diane Keaton is fantastic as a female lead who goes from the main character’s love interest to surpassing him.
10/10

Movie #148/ New Movie #95/ 1930s Film #13/ Nation’s Best #3/ Criterion Edition #33: Limite
This is a rare film I can’t really rate after seeing it once (the only other time I’ve said that was with the original Birth of a Nation.) It’s an odd narrative with striking visuals but a story that’s intentionally hard to follow.
Unrated

Movie #149/ New Movie #96/ 1960s Film #16/ Nation’s Best #4/ Spanish Language Film #5/ Criterion Edition #34: Viridiana
It’s Buñuel’s masterpiece so it’s probably not that surprising that it takes some weird turns, but from the initial story of a novice about to take her vows visiting her deeply troubled uncle, it goes in a very different direction, pissing off an entirely new set of people in the process, while still telling the excellent story of a woman trying to make sense of the world and to do good according to her faith.
10/10

Movie #150/ New Movie #97/ 1970s Film #14/ Nation’s Best #5/ Russian Film #2/ Criterion Edition/ Channel #35: The Mirror
Tarkovsky’s take on the memories of a relatively ordinary man, shifting from the present of 1970s Russia to his childhood in the 1930s is strange but beautiful, creating a fully developed character we barely even see, while allowing Margarita Terekhova to depict two nuanced women in his life: his mother and his ex-wife.
10/10

Movie #151/ 1960s Movie #17/ Best Picture Winner #3/ BFI Top 100 #5: A Man For All Seasons
I’ve been a bit disappointed to see this on some lists of the worst Best Picture winners. It’s one of the best British costume dramas, and depicts some important philosophical ideas extraordinarily well. Paul Scofield’s Thomas More is probably historically inaccurate (the real man was more of a historical zealot), but he captures well a man trying to find some alternative to his conscience and the demands of his good friend the king, whose careful silence does lead to one loophole.
10/10

Movie #153/ 1980s Movie #12/ Best Picture Winner #4/ AFI Top 100 #5: Platoon
Stone’s masterpiece is a powerful take on the experiences of a young soldier, who slowly realizes the biggest challenge in Vietnam isn’t the Vietcong but his own side’s descent into madness and compromise. Willem Dafoe and Tom Berenger deserved their Oscar nominations as rival mentors, but this was one fantastic cast.
10/10

Movie #154/ New Movie #98/ 1930s Movie #15/ Best Picture Winner #5: You Can’t Take It With You
This Best Picture winner is definitely lesser Kapra, worth seeing for the chemistry of Jimmy Stewart and Jean Arthur, as well as the development of themes that are better handled in It Happened One Night, Mr Smith Goes to Washington and It’s a Wonderful Life. It’s almost like someone else’s pastiche of the great director.
7/10

Overview of this set of films…