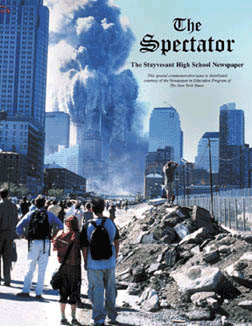 When I got to class, Mr. Tolan was watching the news. I heard about the second plane, and how this was probably terrorism. As I was looking at the TV, I saw that both towers were burning. Sarah, who had been a loudmouth (for want of a better word) in several of my classes, was talking about how she hopes this doesn’t start a war.

President Bush was on the News addressing the nation. Some kid screamed “Idiot!” Sarah screamed “They should drop a bomb on him!” Another joined with “Cheney and Ashcroft, too.” I couldn’t hear much, only that there was going to be an investigation, and that Bush is upset on behalf of the victims, and their families.

Imani, a girl I barely knew was talking about how she wants to move to Illinois where it’s safe. She said her mother wanted her to stay home, because of a terrorist threat. She said she wanted to call her mom to come pick her up, but that there were really long lines in front of all the Stuyvesant Pay Phones.

I began writing about what I observed, while also hearing bits and pieces of the news. I heard something about the Washington Mall being on fire, and a third plane hitting the Pentagon. There was also information that the First Plane had been hijacked, and that the FBI was investigating it, before it hit one of the Towers.

There’s a note I jotted down ten years ago, and I don’t remember what it specifically meant. All I wrote was “there’s panic.”

The news reported that New York City will be closed, and the Subways are down. Imani wants to leave, saying “I don’t want to stay here, and die.” Mr Tolan says we should bomb all the Arabs, although he is still asking students what they want to do for their first assignment, a “How-to” Photo essay.

Some guy I didn’t know was talking about how he knew something bad would happen. How he had premonitions, a nightmare, or something. I thought this was just bullshit. In any situation like this, someone’s going to lie, and say they knew something was going to happen, just so they’d seem wise and important. Either that, or they think every day something bad will happen. I realized I didn’t even bother to look at the World Trade Center that day, as I was heading to school.

Someone on the News announced that the FAA has shut down all airports, and that a fourth plane has also been hijacked, last seen heading towards New York City. I heard how the Fire Department was focusing all their attention on the World Trade Center, and wondered what would happen if there is a normal fire somewhere else. I worried about the possibility of staying in Stuyvesant all day long. I worried about my brother Michael again. I heard something about cell phones not working as I thought to myself how useful one would be, and how I should ask my parents to get me one. Despite not being near any windows, I could hear sirens from outside the school. I didn’t realize at the time, but many of the people driving those vehicles would be dead within a few hours.

I’ve always (at least since first grade) wanted to be a writer, and I’ve had crazy ideas for stories. This was worse than anything I’ve come up with, although I’ll admit I had one plot where a plane crashed into the World Trade Center. It was only one plane, and only one tower. I never had planes crash into the Pentagon.

The news reported that some people had jumped to their deaths rather than burn. This reminded me of something that had happened when a sweatshop caught fire, and there were no emergency exits (probably the Triangle fire). I thought of a joke I had once made about how you could survive something like that. Just wait until the others makes a nice pile. It was a nasty joke, the type of which I didn’t think I could ever laugh at again.

People were talking about what they saw. I heard that the White House was evacuated after a terrorist threat, that Stuyvesant may be evacuated, and how Los Angeles was under alert, and being evacuated. Meanwhile, I had finally begun writing things as they were happening, rather than ten minutes later.

Olivia, a classmate of mine, was crying. She had been in one of my English classes a year ago, and the teacher, one of my favorites at Stuy, said that her writing was good enough that she should go look for a publisher. She was comforted by Michelle, another girl I barely knew, and a guy I didn’t know. Someone she knew (probably a parent) must have worked at the Twin Towers.

At that moment the World Trade Center seemed to collapse on TV. People screamed. I thought the fourth Plane had hit it, or something. We only saw it for less than a second, although in that second I did think “I may die here.” The lights then went out for another second, and when the power returned, the TV showed nothing but static.

I stopped writing, and didn’t continue until I finally got home.

An announcement came on about how no student would be allowed to leave the building, and how lunch would be free. People were debating what had just happened in the last seconds of Television. Imani wanted to go into the halls for a drink of water, but there was some water in the Darkroom. Several students went there.

Class ended. I saw Olivia walking slowly with her friends, in tears, and in shock. I went up a few floors, to the Cafeteria. It was a bit early, but I felt hungry for some reason. Then I remembered we had Homeroom, so I had to walk to the Tenth Floor, passing many visibly shaken students.